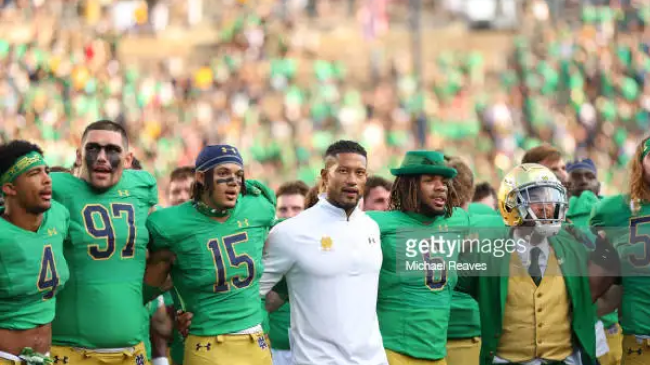 Marcus Freeman finally got his first win as the head coach of Notre Dame today.

His career as the Notre Dame head coach hadn’t gotten off to a great start. He made school history last weekend when the Fighting Irish suffered a shocking upset at home against Marshall, making him the first coach to ever lose his first 3 games as head coach of Notre Dame.

Freeman and the Fighting Irish managed to put an end to the unfortunate streak at home against Cal, winning 24-17 in South Bend.

After the game, Freeman may have gotten a little bit too confident, claiming that is the first of many to come.

Marcus Freeman says Notre Dame win is the first of many

Marcus Freeman on NBC after his first win as Notre Dame's head coach: "This is going to be one of many to come."

I understand the sentiment, especially after winning his first game as head coach, but this was probably not the performance to follow by telling people you have a lot more wins coming.

Notre Dame got the win today, but it was not a particularly convincing win, especially with it coming at home against a Cal team that hasn’t had to prove much in their first 2 games.

This Notre Dame still has a lot to prove before fans will believe that there are a lot of wins in their future. The offense continues to look unconvincing and they have a rough schedule ahead of them that includes a trip to North Carolina, a neutral site game against BYU, a home game against Clemson, and a road matchup against USC.

Notre Dame is going to have to start playing better if they are going to win any of those matchups and prove that the program does have many more wins ahead for Marcus Freeman.