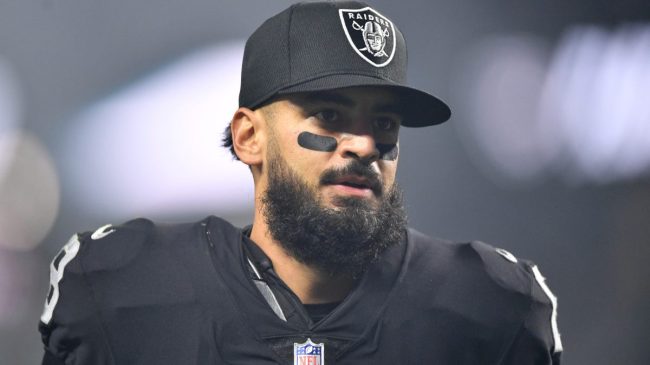 The Falcons are moving quickly in this week’s quarterback market.

It was announced on Monday that the team would be getting rid of longtime starting signal caller Matt Ryan. Ryan spent 14 seasons in Atlanta, landing four Pro Bowl invites and leading the Falcons to a Super Bowl appearance. He was named NFL MVP in 2016.

The former Boston College product has recorded 4,000-yard seasons in 10 of the last 11 campaigns, narrowly missing out on the feat last year by a mere 32 yards.

Now, though, he’s on the move. Atlanta dealt the veteran to Indianapolis Monday morning.

It didn’t take long for the Falcons to find Ryan’s replacement. Just hours after the news broke, the team reportedly agreed to terms with former Raiders passer Marcus Mariota.

Falcons announced they have agreed to terms on a two-year contract with QB Marcus Mariota, who reunites with HC Arthur Smith.

Mariota agrees to a two-year deal with Atlanta, becoming the latest quarterback to find a new home in what’s been a very busy offseason.

The Falcons showed interest in Deshaun Watson before losing out to the Browns. The team was briefly mentioned in connection to Baker Mayfield, but those talks fizzled out quickly.

Now, Mariota gets the keys to the offense after a spending two seasons splitting time with Derek Carr in Las Vegas.

Mariota started 61 games in Tennessee prior to his move out west. In those starts, he posted a 29-32 overall record. The passer owns a 62.8% completion percentage over his seven-year career, tossing 77 touchdowns and tallying more than 13, 000 yards through the air.

Mariota is also deadly with his legs. The dual threat has run for 13 career scores, racking up three separate 300-yard seasons.

That versatility will be nice to have in Atlanta.

With the deal being reported on social media, fans are posting immediate reactions.

Irrationally excited for the Mariota Patterson backfield. No I will not be taking questions at this time

Mariota running to Atlanta to grab the starting QB role

Mariota was a popular teammate and made some plays for Raiders. After two years, he gets his chance to be a starter again in Atlanta.

Jameis Winston and Marcus Mariota — the No. 1 and No. 2 overall picks from the 2015 NFL Draft — are now in the same division and in line to play each other twice a year.

Jameis Winston and Marcus Mariota on their way to the NFC South pic.twitter.com/xf3dNEsAr5

Winston and Mariota after both getting starting jobs in 2022 pic.twitter.com/eLowrQsvol

Marcus Mariota joining Jameis Winston as the follow-up to a franchise legend at QB in the NFC South pic.twitter.com/QpyWMgOms2

It's wild looking back on 2015. Tampa had the No. 1 pick, and the debates between Winston and Mariota knew no end. Hours, days, and months making a case for each guy.

Arthur Smith is a huge Marcus Mariota fan — reunites with him in Atlanta after #Titans’ days. #Falcons have a new QB who will have a real shot to start Week 1. Mariota had other suitors as well. https://t.co/DoUbwbrcDT

If he stays healthy, the #Falcons have a good bridge-gap QB. https://t.co/4Cp1stDIg3

We’ll get our first look at Mariota in the NFC South this fall.