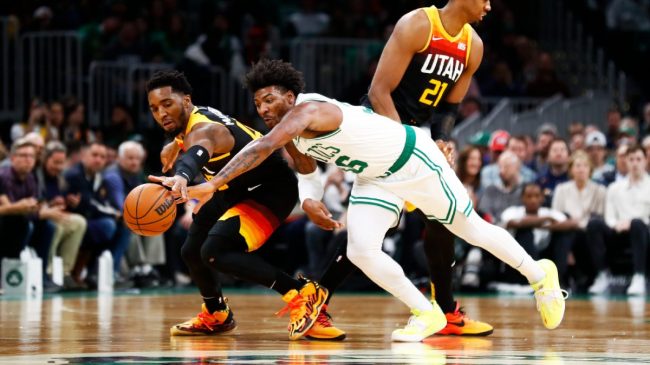 Marcus Smart received quite the honor from the NBA this afternoon.

The Boston star became the first guard since Gary Payton to be named the league’s Defensive Player of the Year. From 1997 to 2021, the award went to rim protectors as opposed to backcourt defenders.

Smart changed that on Monday.

His performance this season was more than deserving of the honor. Smart led the Celtics in steals while being the best defender on the league’s best defensive team.

Look no further than game one in their NBA Playoff series against the Nets for proof of his impact on that side of the ball.

Smart locked down Kyrie Irving on Brooklyn’s final possession as the Nets looked to add to a late lead. The point guard stonewalled his attacker, leading to a long three-point attempt as the shot clock expired.

The Celtics would rebound the miss and drive the length of the court to hit the game winning layup as time expired.

While Jayson Tatum gets the headlines for making the final basket, it was Smart’s stifling defense that led to the runout.

That type of play is what led to this honor, despite his playing at a position where it’s more difficult to win the award.

We mentioned that Smart is the first guard to win the Defensive Player of the Year award since Gary Payton in the late 1990s. So, it’s only fitting that “The Glove,” himself, pass the torch.

Payton showed up to the Celtics’ Monday playoff practice to let Smart know that he’d won the honor. The reaction from the Celtics is great.

A special moment today celebrating the heart and soul of our team, @smart_MS3 ☘️ pic.twitter.com/OPcgYbMmxt

“People always ask me about it all the time. You play that d the way you’re supposed to. You play with a chip on your shoulder, and with some heart.”

Payton then references a tweet that Smart made earlier this year which joked that there must be an NBA rule somewhere in the fine print that says guards aren’t allowed to win DPOY.

He goes on to say that Smart broke that rule, and he should be proud of it.

Somewhere in the fine print for winning this is…

Boston players then soak Smart with water bottles in celebration.

He can enjoy this one for a night or two before getting back to business in the NBA Playoffs. The Celtics take on the Nets on Wednesday as they look to take a two-game lead in the first round series.