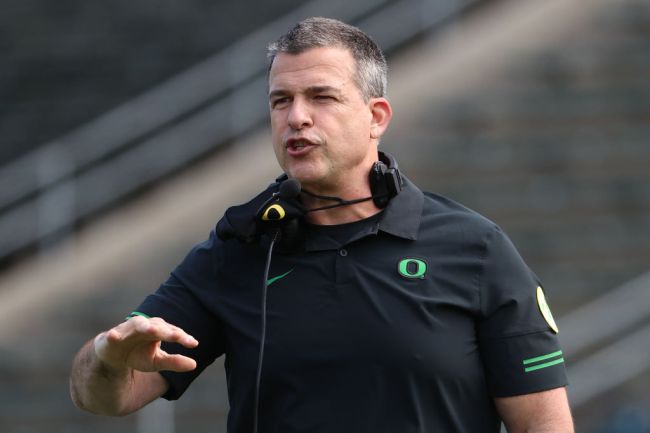 There has been a lot of speculation surrounding USC football’s head coaching job and it leaves a lot of unanswered questions:

Amid the early stages of the job search, a few of the potential hires have spoken out.

Urban Meyer denied any ties to the historic powerhouse, but his body language suggested uncertainty. James Franklin gave a bizarre, roundabout answer that never quite addressed the question.

As for Cristobal, however, he was quick to shut down any speculation about him leaving the Pac-12 North for the Pac-12 South.

He appeared on the Doug Gottlieb show to discuss a variety of different topics. Of course, Gottlieb had to mention the opening.

It started off with a simple inquiry and response. But Gottlieb kept pushing and Cristobal verbally disemboweled him. He questioned the host about why he had him on, why he kept pressing, reiterated his “Go Ducks” retort and finished by saying “here I am buddy.”

Take 30 seconds out of your day to hear Mario Cristobal dunk on Doug Gottlieb when asked about the USC rumors.

"My response is Go Ducks." pic.twitter.com/7ripxvpVW4

Cristobal was uninterested in talking about the USC job and had none of Gottlieb’s pressing. We won’t know know whether his definitive demeanor was a smoke screen until USC announces the hire, but it certainly seems like it won’t be Oregon’s head man.