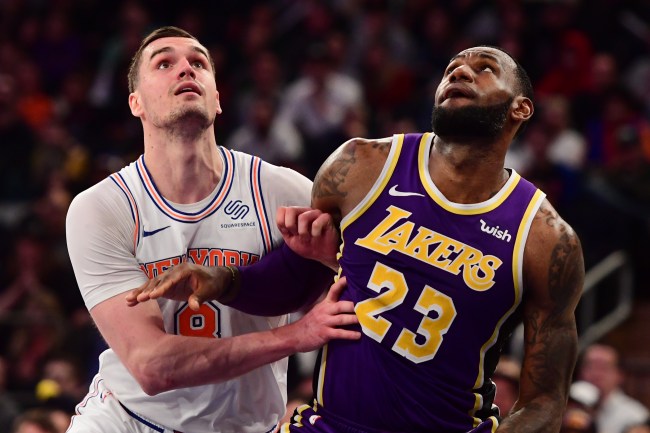 The worst team in the league went on a 13-1 run to close the game and beat the Lakers at Madison Square Garden, 124-123. One of the best players of all-time went just 4-15 in the 4th quarter and got his ugly game-winning shot attempt stuffed by yep, you guessed it, Mario Hezonja. We are officially living in the upside down.

In just weeks, LeBron’s cartoonish streak of 13 straight playoff appearances and eight straight trips to the NBA finals will end. It’s kind of surreal seeing as the 34-year-old has always been able to pull a rabbit out of his hat. Lest we forget, LeBron took a pathetic Cavs team made up of mega-stars  Larry Hughes and Sasha Pavlovic to the 2007 NBA Finals. His 2018 Cavs team is considered among the worst Finals teams in NBA history. This year, the three-time Finals MVP simply couldn’t will a poorly constructed Lakers team to overachieving heights, and it’s impossible not to attribute that to an undefeated Father Time.

Two images from last night’s Lakers vs. Knicks game will be used to symbolize LeBron’s inaugural season in Los Angeles.

Hezonja, a Croatian small forward averaging a shade under eight points a game, made headlines in December when he dunked on Giannis and stepped over him. The 24-year-old punched up yet again when he was photographed pointing and laughing at LeBron following a foul which he perceived LeBron to be selling dramatically.

These 2 photos of Mario Hezonja pointing at LeBron are amazing.

Given Hezonja’s game-sealing block, the photo blew up on social media, with many dubbing the Croatian ‘The King Killer.’

I, too, kneel in reverence on the shores of Hezonja Island still pic.twitter.com/7LFZhx20jW

This is what the statue of Mario Hezonja should look like outside of MSG when we put it up this off season pic.twitter.com/ubRbWaDmyi

Is this your king?

Its Mario Hezonja’s world we just live in it pic.twitter.com/pASWjPc4Gt

By Championship Belt rules, Mario Hezonja is now the Best Player in the World. Sorry, I don't make the rules https://t.co/n2lCWbSzoy

When you just wanted to executive produce movies and drink wine but then Mario Hezonja blocks your game-winner and everyone is making fun of you pic.twitter.com/i5tuv532KG

Lucky for Hezonja, the Lakers don’t play the Knicks again this year.