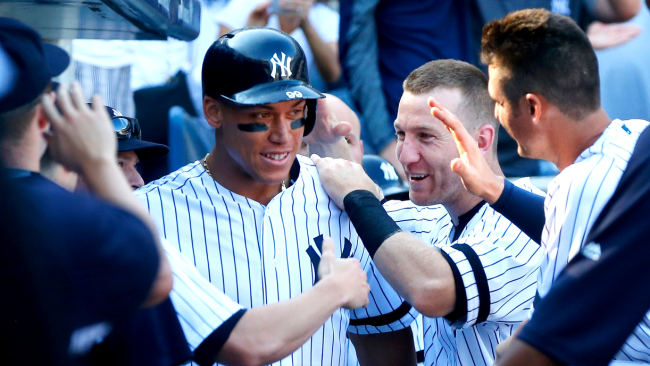 He currently sits at 55 home runs after going yard against the Twins last Wednesday.

According to Mark McGwire, who holds the record* for most home runs in a season by a right-handed batter with 70, Aaron Judge should also at some point over the next few years, surpass the Major League Baseball single-season home run record* of 73 set by Barry Bonds in 2001.

“I think he’ll finish with at least 65 home runs this year, and then position himself to hit, get to 73 to 74 in the next five to eight years. I really believe he’ll have that opportunity. He’s going to get close to it, and say, ‘Where can I bunch in nine more homers?’ God willing that he stays healthy, he’s going to do that, too.”

Considering that Aaron Judge has only had one season so far, 2017, in which he has stayed healthy enough to play in 150-plus games, that is certainly going to be a stumbling block. That and the fact that he is already 30 years old, which in this post-steroid era should mean that he will soon start to slow down with his prodigious power numbers.

Not that Judge isn’t capable. In his career, he is averaging around 49 home runs per 162 games played. The problem is, in his four full MLB seasons thus far, Judge is averaging just 129 games played. Unfortunately, most players don’t stay “healthier” the older they get.

He currently has 18 more home runs than the next batter on this year’s home run list: Kyle Schwarber with 37. Only Babe Ruth (in the 1920s) has ended a season with that sort of lead over second place on the league’s home run list.

The current record for the most home runs in a season by a right-handed batter in the American League is 58, by Jimmie Foxx in 1932 and Hank Greenberg in 1938, so if nothing else, Judge should break that mark this year.

Should he stay on his current pace and hit 63 home runs this year, Judge would have the most homers in a season since Bonds’ record-breaking* year with 73.

Since that year, the most any player has hit was 59, Giancarlo Stanton for the then Miami Marlins in 2017.

If Judge has any shot at breaking Barry Bonds’ record* of 73 home runs, this year might be his best and only chance.

With 21 games left in the Yankees’ season, Judge will have to average almost one home run per game for the rest of the year to tie Bonds. Sammy Sosa hit 20 home runs in 27 games in the month of June 1998, but the baseball world was a whole different place back then.