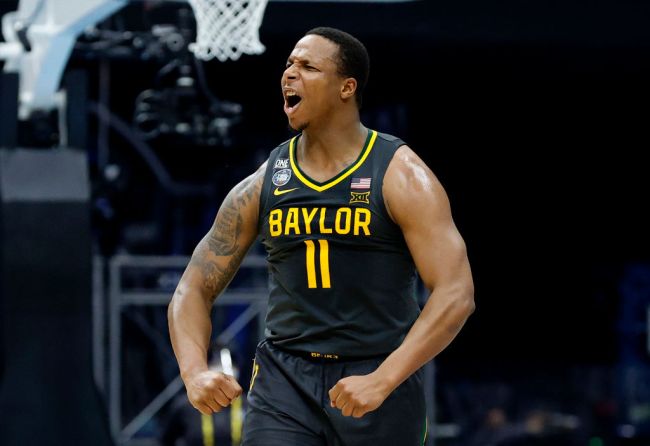 On April 5, 2021, Mark Vital won a National Championship as a guard on the Baylor basketball team. Now, nearly five months later, he is going pro in football.

Vital, who stands 6-foot-5, 250 pounds, announced his intentions to pursue a career in the NFL on Monday despite not playing the sport since the eighth grade.

Thank you Basketball you gave me everything and created opportunities for me. Time for a new chapter #NFL🙏🏾

This decision comes as quite the surprise for the Louisiana native, who previously said that he’s “not a football player,” because, well, now he is.

I will not attend college football. I am pursuing the NFL.

Vital averaged 23.4 minutes, 5.6 points and 6.7 rebounds per game during his 30 appearances for the Bears in 2020/21 and graduated in May. Despite leaving Texas with a ring, he went undrafted in the 2021 NBA Draft and signed with the Portland Trail Blazers.

During the NBA Summer League, Vital averaged just 1.3 points, four rebounds and .7 assists in three games. He says that the transition to the gridiron has nothing to do with his lack of opportunities to continue his career on the hardwood.

“I was never going to leave basketball just to leave basketball. I had a plan, but I had to make sure that the plan was right,” said Vital to KPLC News. “I’m leaving basketball with things on the table. I had exhibit 10s, two-ways and overseas deals. For me to leave that, I actually had to have something in football.”

That “something” he references likely comes at tight end. He says that he has worked out for a few teams and that they like his size, speed and strong hands. He admitted that one of those teams was the Dallas Cowboys.

For someone who has not played football since middle school, Vital has high praise for himself.

“I feel like I can be a Hall of Famer. I’m already getting compared to Antonio Gates from different scouts and teams when hearing them talk about me. I’m already getting compared to a Hall of Famer and that’s motivation to me to get to that level,” Vital told KPLC. “I can see the similarities. He and I are both explosive, fast and big. We are built the same.”

While the Louisiana-native is excited to get his start with professional football, the decision to play is pretty hilarious. He has dodged any questions about his potential in football throughout his whole career and has often shot down comparisons to Rico Gathers.

Gathers, who is also a former Baylor basketball star and fellow Louisiananimal, chose to forgo a career in basketball to focus on pro football aspirations. He is now a tight end on the Cowboys.

Vital has gone a long way to avoid the comparisons throughout the years because he believes that they are two different players on the basketball court and football field. And yet, their stories are very similar.

It will be curious to see what comes of Vital’s decision, but he is confident in his choice.