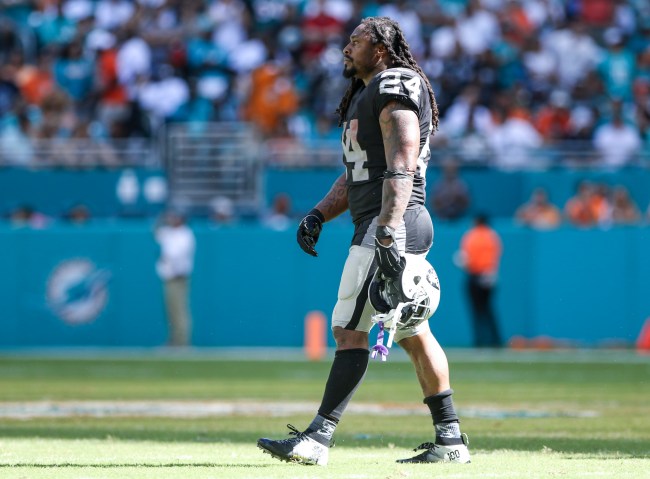 Seattle-area moms are mobbing up against Marshawn Lynch after the NFL legend hurt the feelings of 11-year-old campers at Lynch’s Fam 1st Family camp in the Seattle area.

In footage obtained by TMZ, Lynch can be seen setting up tackling drills, despite the kids not having any pads or protective equipment on. He nearly orchestrated a murder by pitting the biggest dude at camp against a diminutive girl. When campers gave him lip about the drill, he sent them running.

At the two-minute mark in the below video, you can see a mom jog on the field to throw her son’s camp shirt at Marshawn’s feet in disgust in the wake of Marshawn telling the kids “Get the fuck out” after they objected to the drill. This reportedly caused some of them to cry as they were sent running.

Marshawn then runs off the field and sprints up the bleachers to have a discussion with the irate mom.

He then says something that nearly made her head pop off: “Is there a man with you?”

A couple outraged mothers prematurely left the camp with their kids, prompting Marshawn to grab the mic and address the remaining parents and campers.

There are two schools of thought here:

#marshawnlynch is a dick and everyone defending him is a bigger one. Good for that Mom.

Some mom got mad that Marshawn Lynch cussed at her son at his camp cause he wasnt listening lmfao, that kid needs to play another sport then .

I fall somewhere in the middle. I expect and even encourage the cussing and tough love, but tackling drills with no pads involving a 300-pound dude and a girl who can be blown over by a strong wind isn’t football. It’s funny, but not football.

Bottom line is that Marshawn Lynch should not be running a camp with anyone under the age of 16. We’re talking about a dude from Oakland who used to play tackle football on the pavement. These little powderpuffs are just looking forward to snack time and a free t-shirt.