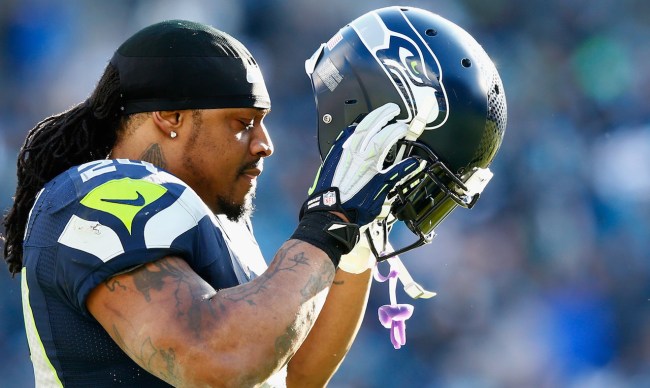 Facing an injury crisis at the running back position as they head into the NFC Playoffs, the Seattle Seahawks have called in a favor to franchise legend Marshawn Lynch, who has signed a contract with the team that will last until the end of the season.

According to various reports, the 33-year-old Lynch signed a contract with the team that will last for their Week 17 against the San Francisco 49ers and the subsequent postseason. In addition to Lynch, the Seahawks also added former running back Robert Turbin to the depth chart.

While the 33-year-old has not played in the league this season, he never filed his retirement paperwork with the league, thus allowing him to sign with the Seahawks.

Lynch, who played with the Seahawks from 2010 to 2015, won a Super Bowl with the team in 2013-14. Lynch last played in the National Football League with the Oakland Raiders last season. However, Lynch was shut down in October, as he was placed on injured reserve with a groin injury. In total, Lynch ran for 376 rushing yards and three rushing touchdowns in six games.

Speaking to ESPN 710 Seattle on Monday, head coach Pete Carrol said that the team is “anxious” to see Beast Mode:

“He’s had plenty of time to be working and get ready in case something came up, and I’m anxious to see him when we get him here. There’s a lot of history here that’s great history. There was nobody that ever amplified the kind of mentality and toughness that we like to play with, so if we get a chance to get the Beast back on the field, we’ll see how that works out.”

Beast Mode’s first game back with the Seahawks will be a massive one, as they will be hosting the 12-3 San Fransisco with both the NFC West title and the #1 overall seed in the NFC Playoffs on the line.

In an interview posted on YouTube by Lynch’s Beast Mode Productions, the former Pro Bowler said of his return to Seattle: “We got history there. We got unfinished business.”