Earlier today, news broke that Marshawn Lynch’s representatives have agreed to a one-year deal with the Oakland Raiders, pending a physical exam that was reportedly completed today. The deal has a base salary of $3 million and a max value with incentives of $8.5 million, including an extra $2 million more if he gains 1,000 yards.

Back in April, Beast Mode met with the Raiders and expressed his desire for his hometown team, as he grew up in Oakland and played his college ball at nearby Cal.

Lynch has broken his silence and has confirmed that he’ll be a Raider for the 2017 season. Or at least I think that’s what this gibberish means.

If you have no idea what any of that means, neither does free agent linebacker Emmanuel Acho. Allow Doobie B. to enlighten us all. 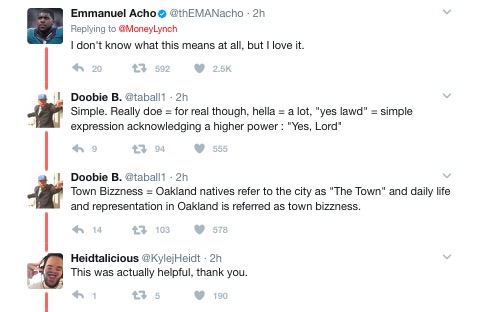 BEAST MODE IS BACK.