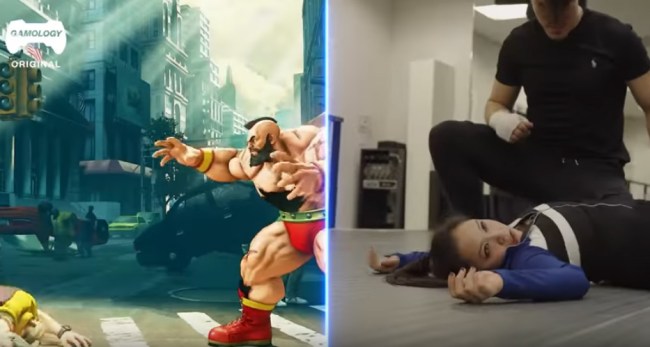 Gemma Nguyen is a 7-time karate champion and action movie stuntwoman. Stuntman Noah Fleder is a third degree black belt, seventh degree black belt in Tae Kwon Do and fourth degree in Hapkido. So they know a thing or two about martial arts… in real life.

Unfortunately for them, at least in the video below, the classic video game Street Fighter is not real life.

Yep, sorry to break it to you, but Chun-Li, Cammy, Ryu, Karin, Ken, Zangief, and F.A.N.G. are not real people.

So attempting to re-create 16 of the famous signature moves performed by the various characters in the game is no easy task. Especially these moves…

• Ryu – two strikes with one kick

• Ken – knee-tap-knee into a front kick

• Karin – grabs hand, goes underneath, and throws (“She wants to see your manager!” joked Nguyen.)

• Zangief – bear hug into a lift and throw

• F.A.N.G. – knees strike to the back of your opponents knees into an axe kick (“I’ve never had someone strike me with their knees,” Nguyen said about this move.)

• Cammy – neck snap from opponent’s shoulders (“This one was actually a really scary move for both of us,” said Nguyen.)

• Karin – block into a shoulder shim

Zangief – grabs and flip into a pile driver (“Okay, definitely didn’t try this because I like living,” said Nguyen.)

All in all, they actually did pretty well, and way better than most of us could ever dream of doing.