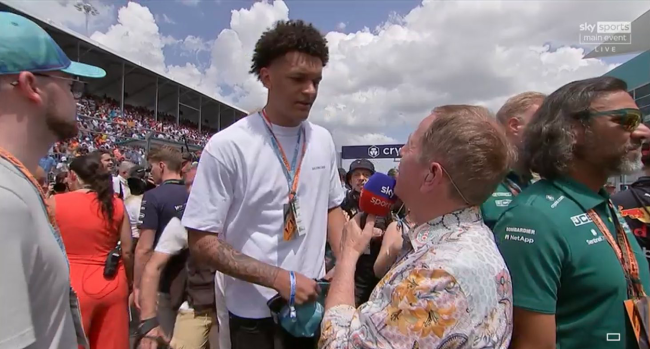 Retired F1 driver Martin Brundle is 62 years old and has become a legendary staple in the sport as a commenter. He is very knowledgable in the sport of racing, but it became abundantly clear on Sunday that he doesn’t know much about basketball.

Prior to the first-ever Miami Grand Prix, Brundle was in the paddock and on the track with the drivers, their crews and all kinds of celebrities. The pre-race coverage is unlike any other in sports and the unfettered access to everything and everyone is unmatched.

He spent his time in Miami speaking to anyone and everyone that he could.

Many of them did not know who he was, which made the entire thing even funnier.

At the same time, Brundle wasn’t always sure exactly who he was talking to either.

“Sorry I don’t know who you are but I would like to know you” “I’m a social media sensation let’s say that” “oh, modest as well” hahahaha. Brundle is a national treasure https://t.co/F3K7g4QTGp

Martin Brundle #SkyF1 …. Who are you he asks 😀…. 'im a social media sensation' say Gianluca Vacchi (with his 22m Insta followers lol)

Of the people that he was able to interview, Brundle’s time with (a very confused and caught off guard) D.J. Khaled was incredible. Brundle interrupted him mid-photo session with Serena Williams, Gabrielle Union and Dwayne Wade, which only made things funnier.

And then Brundle pulled Venus Williams. She clearly had no idea what was going on and the uncomfortable moment made for truly hilarious television.

Shortly thereafter, Brundle ran over to who he thought was Patrick Mahomes. It was not. It was Paolo Banchero.

This is now Patrick Mahomes what is going on pic.twitter.com/wze471siG6