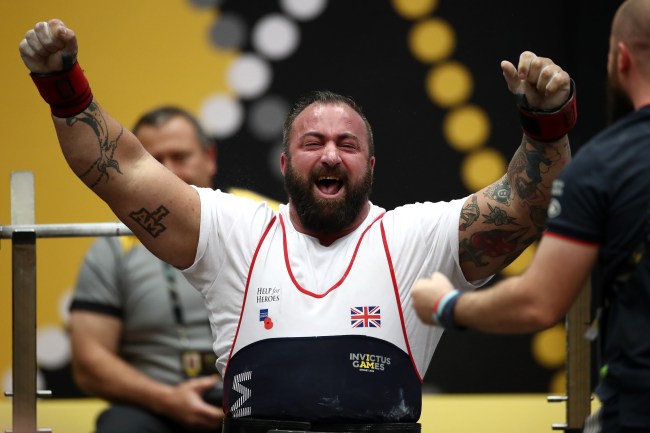 Martin Tye was a Lance Corporal in the British Army a decade ago when his life was forever changed after a suicide bomber crashed into his vehicle, detonating a bomb, and leaving Martin paralyzed. He’d completed in Iraq, Cyprus, and Lebanon after joining the Army at 21-years-old but it was his tour in Afghanistan that would forever change the course of his life.

Earlier this month, the Strongman became a Guinness World Record holder after becoming the first person alive to lift 505 kg (1,113-pounds and 5 oz). Prior to this record attempt (there’s a clip of the record below) he spoke with Guinness World Records about the day that changed his life:

“It was a war zone, we knew what we were going into and it was the day before the elections so we were preempting something anyway. The day before we had a suicide bomber on the front gate.”
“Then we went out on a pretty routine patrol, we were in a convoy – I was commander of my vehicle. We drove around the corner and a suicide bomber drove into the back of my vehicle and detonated.”
The blast has left Martin paralysed. He now has metalwork in both knees, as well as his shoulder, no sensation from the knees down and also sustained a blast injury to his lungs. On his left knee alone he has undergone 20 operations, and he now has arthritis in both knees. (via)

After being left paralyzed with no sensation below his knees and undergoing 20+ operations on his left knee alone, Martin was diagnosed with PTSD. But his life and mood began to positively improve when he began competing as a Strongman.

In 2018, Martin Tye was named ‘World’s Strongest Disabled Man’ and he lived up to his title earlier this year when he set a Seated Deadlift world record of 501kg (1104.52 pounds) at the Arnold Sports Festival. Flash forward to May 6th, 2019 and he broke his own record and became the first person alive, disabled or not, to put up 505 kg (1,113 lb 5 oz) in the Seated Deadlift:

Since embarking on a career as a competitive Strongman, Martin has earned ’11 medals across the likes of powerlifting, indoor rowing, wheelchair rugby and wheelchair basketball’ according to the Guinness World Records book. In three years of competition, he’s completely changed his life:

Subsequently he was diagnosed with PTSD (post traumatic stress disorder), but things started to change when he got back into sport and entered the world of strongman competitions.
“Before that I wasn’t really engaging with anything, I didn’t want to know, sat in the house all day. Since I found sport and particularly disabled strongman, the confidence has come back.”

His partner Beckie Ingram agreed, adding: “Mentally when I first met him he was pretty withdrawn and had no confidence whatsoever, so I had to build that up through taking him to meet other military personnel. He didn’t do crowds so I took him to Army v Navy (rugby match at Twickenham stadium), you can’t get bigger than that crowd.
Beckie has played a key role in Martin’s sporting career, she signed him up to the Invictus Games. While watching it one night on TV, she heard him “giving it the big one” about how he could do that, so she got him to find out for real.
“He explained he would be interested in it but I knew he’d never apply himself. So I sat in work one day, sent an email and applied for him to be a part of the team. (via)

Paralyzed Army veteran Martin Tye’s world record of 1,113-pounds was considerably more than the 1102-pounds lifted by the World’s Strongest Man, Eddie Hall. If you can’t find some motivation in that then I don’t know what’s wrong with you.

For more on Martin Tye’s story, you can click here to visit the Guinness World Records website which has a full writeup on his journey and achievements.