The Most Intimidating Man On The Planet, Nicknamed ‘The Nightmare,’ Just Signed An MMA Contract 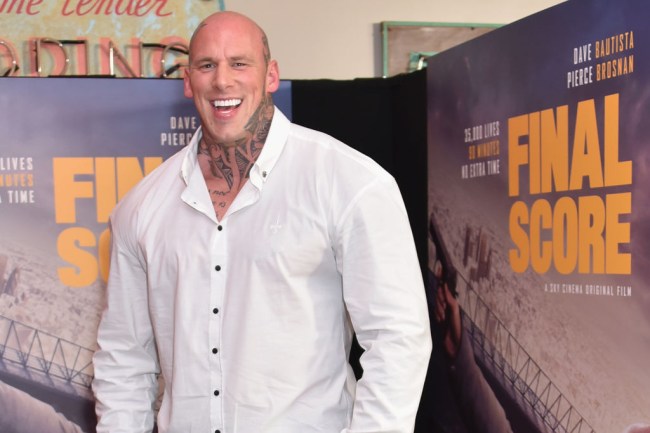 I think I just found the most intimidating looking man in the world and his name is Martyn Ford. Ford, who stands 6-foot-8 inches tall and weighs 320 pounds of pure muscle rose to fame through his social media accounts, where he posts pictures that make Hafþór Júlíus Björnsson (The Mountain) look like Doug Flutie.

The 33-year-old Englishman’s formidable size has landed him in several TV shows and movies, including Kingsman: The Golden Circle, Viking Destiny, and Redcon-1. Ford has also been nicknamed The Nightmare after his character in the film Undisputed 4.

Now, he’s looking to try his hand at Mixed Martial Arts. In a recent Instagram post, Ford announced that he has signed with Polish promotion KSW as a precursor to what he hopes to be a long and lucrative MMA career.

I think it’s pretty fair to say the news is out, and YES I Will be stepping into the cage for @ksw_mma VERY SOON, no doubt there will be critics, I’m here to prove those people wrong. All energy is good energy, the KEY to success is to take every energy source giving to you and use it !!!!! Training is going incredible, body is changing daily, fitness is coming back, energy is through the roof, now all that is left to decide is …….. do I go by then name THE NIGHTMARE!!!! Who wants to see Koshmar in the cage !!! #martynford #ksw #nightmare

The Nightmare will obviously be heading for the super heavyweight division, seeing as this is how he looks next to former UFC fighter Anthony Johnson.

What an insane session, you won’t want to miss this incredible session with @anthony_rumble. A session fuelled by passion and enthusiasm @ignite.nutrition #ignite #martynford

As News Au points out, a natural opponent for Ford would be five-time World’s Strongest Man winner Mariusz Pudzianowski, who took up MMA after an illustrious strongman career and holds a 12-6 record in fighting.

It would be awesome to see Ford square off against former Dallas Cowboy Greg Hardy, who remains undefeated, 3-0 as a pro with a 3-0 amateur career, with all six fights ending in a first round TKO. Hardy is currently playing out a unique developmental contract where the UFC is paying him to fight in the minors until the UFC deems him ready to throw him in with the world’s best.

Size doesn’t necessarily translate to success in the octagon, but if there’s an intimidation factor that comes into play, this dude has it in spades.

There are a few benefits to the fight game 😂😂😂 👊 starting to shape up rather good, loving the whole new feel, lifestyle and ENERGY i have again. Transferring from one sport, to another is not easy, it takes time, hard work, dedication, education and HEART…. especially when you consider less than 6 months ago I nearly died, losing 7 stone in body weight and my bodies immune system was on its arse. I want to document my WHOLE journey with you guys, to show you ANYTHING really is possible, if you are willing to do the work. It would be easy to hide the process, BUT where is the fun in that. To many people are afraid to show you there weaknesses in fear they look shitty or uncool, the fact is, WE ALL have weakness, the ability to over come these is what really counts. Like anything in life, you either step up or step away !!! It’s your call. @ignite.nutrition #ignitenutrition

ITS HERE The PREMIERE of FINAL SCORE, just waiting to be taken down to the lions (sorry I mean press 😂😂😂) I just hope they catch my pretty side 🙏🙏🙏 😂 Going to be one hell of a night, wish me luck, ohhh and @davebautista @richross13 hurry up !!! 😂😂 #film #Final Score @judassinned @arthursleepshoes

SMASHED IT !!!! So happy with that, MASSIVE day for myself, another huge personal mile stone achieved, if I got then part OR not, I did myself proud. The energy you get from seeing and feeling progression is phenomenal, just remember anything in life IS possible, if you want it bad enough, you just got to believe and never give up. Now that’s London done with, time to hit the gym lol #martynford @swoleoclock #swoleoclock