Marvin Harrison Jr. Looks Like A Freakish Beast While Catching Pass From Himself With JUGS Machine 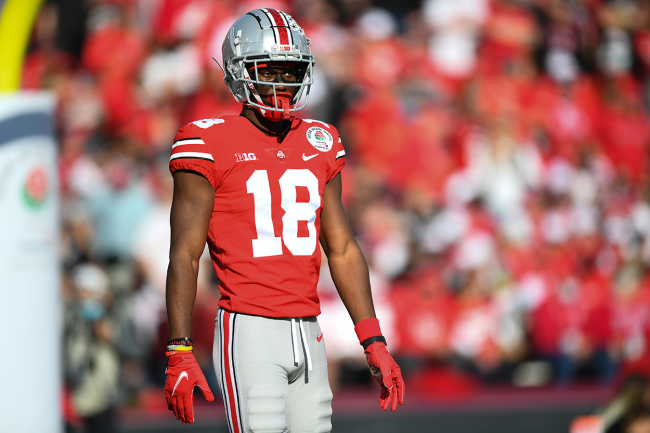 Despite the fact that two Ohio State wide receivers were drafted in the first round of the 2022 NFL Draft, it’s the next man up in Columbus. The Buckeyes’ receiver room is stacked again this year and Marvin Harrison Jr. is set to be a big part of the production.

Harrison Jr., of course, is the son of NFL Hall of Famer Marvin Harrison. The 6-foot-3, 205-pound rising sophomore has been on campus for a full year now and has already had a big impact.

Although he fell down the depth chart a bit during the regular season, Harrison Jr. burst onto the scene in the Rose Bowl. He caught six passes for 71 yards and three touchdowns in a 48-45 win over Utah.

Since then, Marvin Harrison Jr. has been nothing but impressive during the offseason at Ohio State.

He looked like he could straight-up fly during spring workouts. It was ridiculous.

And all of the reports out of Columbus have been overwhelmingly positive. Harrison Jr. just keeps dominating.

Jaxon Smith-Njigba will be the top target for quarterback C.J. Stroud in 2022, and he will garner a lot of emphasis defensively. That should allow Harrison Jr. to have a field day with weaker coverage as the secondary option.

As the 2022 regular season slowly approaches, Harrison Jr. is putting in work during the offseason. He posted a video from one of his workouts in May and looks like a big, strong pass-catcher who shows tremendous burst and runs fantastic routes.

Over the weekend, Harrison Jr. took thing up a notch. (I have never seen anything like what he was doing.)

In a video posted to Instagram, he lines up the ‘JUGS Machine’ at the 35-yard-line with a significant upward angle. Harrison Jr. then proceeds to put the ball in the machine himself and takes off toward the end zone. He covers the 35-yard gap while the ball is in the air and then secures the catch for a touchdown.

Not only does Harrison Jr. show off his explosive speed, but he looks absolutely jacked.

Harrison is on a fast track to the NFL and this could be the year that really puts him on the map. Opposing defenses beware.