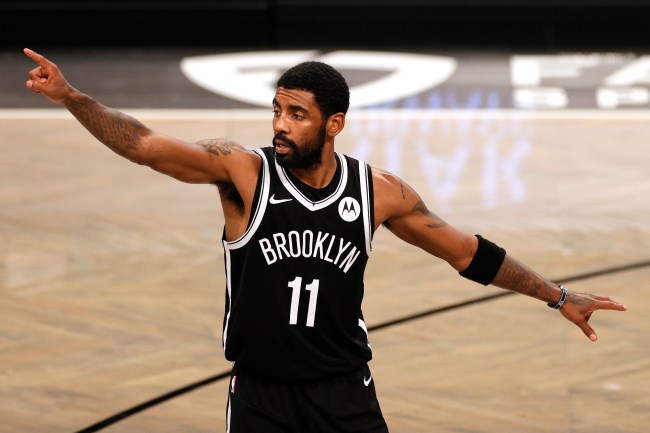 Kyrie Irving’s mysterious hiatus has caught the attention of the NBA.

For the past week, Irving has not reported to the Brooklyn Nets due to “personal reasons” and it’s currently unclear when he’s going to return.

After missing three games, a video of a maskless Irving at what appeared to be his sister’s birthday party surfaced online.

Well, this is unfortunate. Here’s another video of Kyrie Irving at a birthday party with his sister, Asia Irving. pic.twitter.com/zTPbf5ZIxU

According to ESPN’s Adrian Wojnarowski, the NBA is now looking into the videos of Kyrie partying to see if he broke Covid-19 protocol and may force him to quarantine before he returns to the courty.

Sources with @Malika_Andrews: As the NBA is expected to begin examining online videos circulating of a maskless Kyrie Irving at a family birthday party, there’s no belief that he will return to the Brooklyn Nets lineup this week.

Irving has missed four consecutive games for personal reasons, been ruled out tonight vs. Denver and sources expect him to continue to be sidelined at least through Wednesday (Knicks) and Saturday (Orlando) games. https://t.co/cPemTB0eHi

In the videos — which began being widely shared on Monday night — a smiling Irving is dancing with his sister, Asia, on a confetti covered floor and clapping as she blows out candles. If the video is found to be recent, it could be a breach of the league’s coronavirus protocols.

The league’s COVID-19 guidelines forbid players from going to clubs, bars and lounges. They also ban attending social gatherings of more than 15 people.

This investigation comes during a turbulent week, as the league is re-evaluating its coronavirus health and safety rules. The league has canceled three games this week as positive COVID-19 tests and contact tracing quarantines mounted.