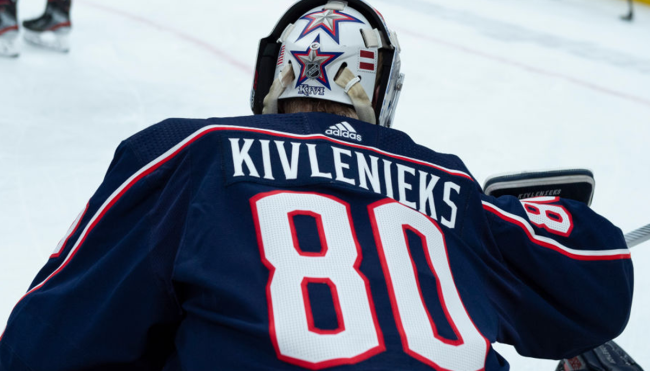 Earlier this month, the hockey world was rocked after learning Columbus Blue Jackets goalie Matiss Kivlenieks passed away after being struck by a firework at a 4th of July party in Michigan.

It was initially reported Kivlenieks lost his life due to the injuries he’d suffered after falling over a railing while attempting to avoid a mortar that had tipped over, but a coroner report confirmed he’d passed away from the trauma he suffered after being struck in the chest by the errant pyrotechnic.

The NHL paid tribute to Kivlenieks prior to the fourth game of the Stanley Cup final, and on Thursday, friends, family, and teammates gathered for a memorial service where multiple members of the Blue Jackets organization eulogized the Latvian who was only 24 at the time of his death.

That included fellow goaltender Elvis Merzlikins, who gave an incredibly moving speech honoring the man he viewed as a brother.

Merzlikins was in attendance at the Independence Day gathering, and during the service, he revealed Kivlenieks died a hero when he made “his last block” by stepping in front of the firework to prevent it from striking the group of 50 people it would’ve hit if he hadn’t intervened—a crowd that included Merzlikins’s pregnant wife.

Elvis Merzlikins at the memorial service for Matiss Kivlenieks. Kivlenieks died after he was struck in the chest by a fireworks mortar shell on July 4. pic.twitter.com/69C09ggG67