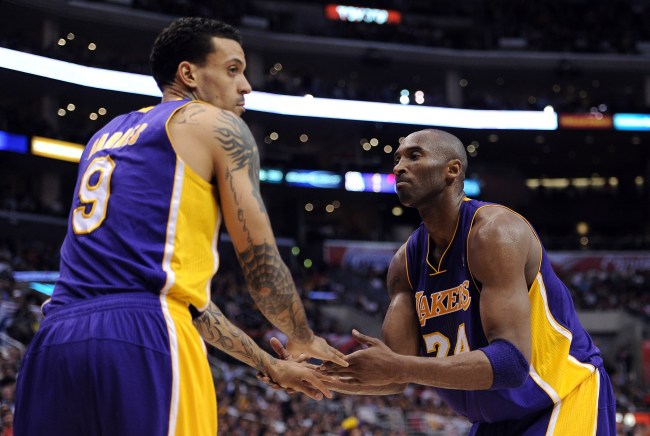 What do all these NBA players have in common? They all were bullied by Kobe Bryant for lack of killer instinct.

In Kobe’s world, nice guys finish last and guys who wouldn’t hesitate to send grandma to an early grave during a casual game of driveway hoops are the guys Kobe wants to surround himself with in the trenches.

Matt Barnes is a classic example.

The NBA journeyman hosts the All The Smoke podcast  with Stephen Jackson and recently brought on his former nemesis, Kobe Bryant, to discuss the now infamous “no flinch” ball fake and how it ultimately brought them closer together.

Barnes first revealed why he always relished in the opportunity to play Kobe.

“When I played you I looked forward to it because – everyone know how fucking good you are – but you mentally attack people, too. You do your little Kobe shit where you’re elbowing and grabbing, knocking the wind out of me… And I’m the one getting fouls. I’m the one getting T’s. So it just came to a head, and I was like, ‘man, fuck. I might have to fight this dude.’ Fuck basketball. Fuck everything.”

Barnes’ frustration spilled over during a game on March 7, 2010 and a beautiful moment was birthed.

Barnes revealed that in the summer of 2010 Kobe, fresh off back-to-back championships, phoned him in a successful recruiting effort all because Barnes fucked with him on the court.

Barnes, then a member of the Orlando Magic, opted out of the final year of his contract to join Bryant and the Lakers and would spend the next two seasons coming off the bench.