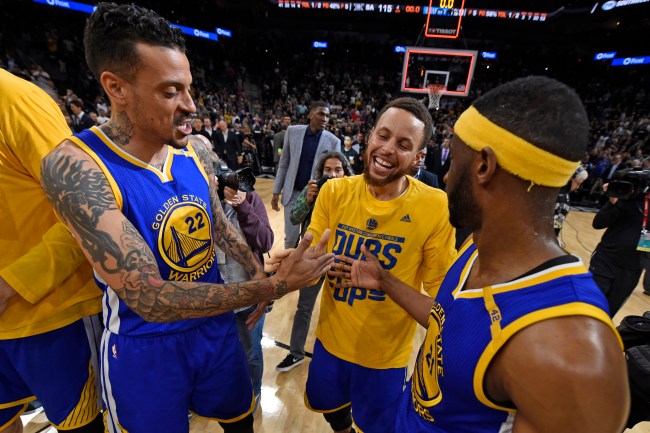 Man, major kudos to former NBA player Matt Barnes for telling it like it is. While the 14-year vet was always sort of outspoken during his playing days, he’s taken shit to the next level ever since he retired following the 2016-17 season, opening up about his love for marijuana now that he’s free to smoke as much as he wants to.

Over the past year or so, Barnes has talked about how he used to get high prior to playing in NBA games and how the “We Believe” Golden State Warriors once partied with Snoop Dogg after a playoff upset, so he’s definitely one interesting character anytime he’s being interviewed. And, while talking to B-Real, the front man of the legendary group Cypress Hill, Matt Barnes smoked a bunch of pot and had a pretty awesome conversation.

Naturally, since Barnes was teammates with the legendary Kobe Bryant, the former baller was asked if he had ever smoked with The Black Mamba. Although the former player said he never got the chance to — and was unsure if Bryant ever did on his own — there was one interesting tidbit that came from the convo: That Steph Curry owes Matt Barnes a little smoke out sesh.

Apparently, Curry made a promise to Barnes when both were teammates that, had the Warriors won an NBA title during the 2016-17 season, that the two of them would smoke weed together. Take a look below to see Matt Barnes telling the story.

Man, this needs to happen. Like, seriously, now that the NBA reportedly isn’t going to test players for recreational drug use once the league returns, can we just get Matt Barnes and Steph Curry in a room to smoke together and record the whole conversation? Dude, Steph, you need to be a man of your word and carry through with your promise.

It’s time for Steph to ditch the whole innocent act and go roll (and smoke) a joint with Barnes, guys. I don’t care if he’s got a squeaky clean image to protect or not, because he made a damn promise and the dude needs to stop playing games. Seriously, who wouldn’t want to see a high AF Curry?