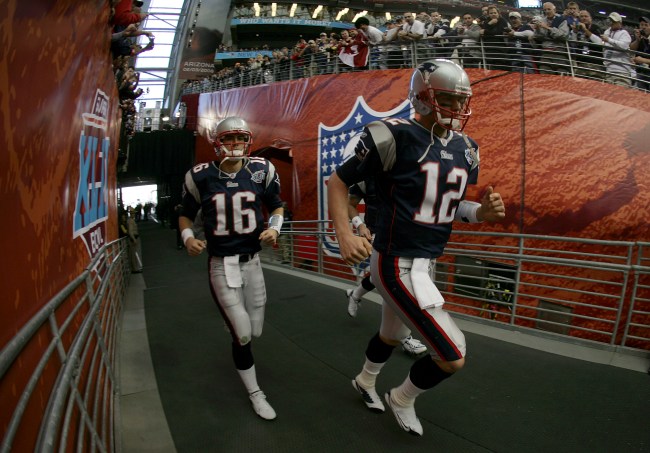 Matt Cassel spent over a decade serving as a serviceable quarterback to seven different NFL teams. In his career, he led the Chiefs to their first AFC West divisional championship in seven years, earning a Pro Bowl nod in the process.

In his 2008 season filling in for Tom Brady’s ACL, Cassel had become the first quarterback in NFL history to record at least 10 wins, 325 completions, a 63% completion mark, 3,600 passing yards, 20 touchdown passes, 11 or fewer interceptions, and 250 rushing yards in a single season.

Still, the 37-year-old admits that one of the coolest games he’s ever been a part of was an ultimately meaningless one where Tom Brady made sure he never sniffed the field.

The year was 2007 when the Patriots had arguably the greatest team ever assembled. In the final week of the regular season, the Patriots had already ran away with the the AFC’s top seed and were squaring off with the New York Giants for an opportunity to make history with a perfect 16-0 regular season. The Giants, who had already locked up the five-seed, had nothing to gain outside of pride and an opportunity to squander the Patriots’ perfect season.

Cassel recently revealed on NBC Sports Boston’s Patriots Talk Podcast that he had been taking reps all week in preparation to enter the game during the second or third quarter. That never ended up happening.

“We get into the game and it starts going back-and-forth early, and all of a sudden Brady comes over to the sideline, I think at one point in the first quarter, and is like, ‘I’m not coming out of this (expletive) game,’ ” Cassel recalled. ” … And everybody to a man, though, from Randy (Moss) to (Wes) Welker to everybody that was on that offensive unit, was like, ‘Hell no, I’m not coming out of this game.’

“These guys didn’t blink at all,” Cassel, who spent four seasons with the Patriots, told Curran. “They knew that they were in a dogfight. We knew that we could score. We had been doing it all season long, we had the weapons and it just was a matter of time before we put more points on the board. And it just was one of those things where at the end of the day it was like, ‘Get us a stop and we’ll go score.’ And that was kind of the feeling. Not one person was there panicking or overreacting, going, ‘C’mon, we’ve gotta do this.’ No, it wasn’t that. That group played with so much confidence.” [via NESN]

Don't miss Sunday's all-new episode of Giants Chronicles at 10AM on MSG. It's an in-depth look at the 2007 regular-season finale against the New England Patriots! pic.twitter.com/XkmZTY98RP

11 years ago today, the 2007 Patriots defeated the Giants to become the first team ever to finish the season 16-0.

Aaaaand then the Giants and David Tyree’s helmet got the last laugh in Super Bowl XLII by pulling out a wild 17-14 victory and leaving the Patriots with the most disappointing 18-1 season imaginable.

Sports, man. What a fickle mindfuck.