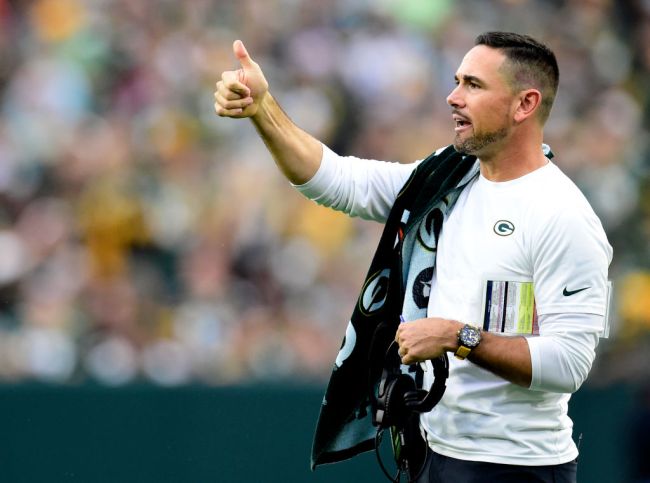 Packers head coach Matt LaFleur wants his team to be ready to play when they take the field against the Bengals on Sunday. It is Green Bay’s first noon game of the 2021 season, which requires a different type of game day preparation.

LaFleur discussed waking up for an early game with media this week and had a rather interesting comment. He wants his players to “wake up with their piss hot.”

In response to LaFleur’s urine-focused remark, Packers reporter Rob Demovsky asked the question we all want to know the answer to: “How does one get their piss hot?”

Packers beat writer Matt Schneidman quickly questioned whether hot piss was a healthy thing and suggested that perhaps if that is the case, the person pissing hot should see a doctor.

LaFleur thinks piss should always be hot. I strongly disagreed. I think that means you need to see a doctor.

He was not alone in his thinking.

One fan replied: “Any time I’ve heard of pissing hot, it was referring to not being clean enough to pass a drug screening. I don’t think Matt wants that.”

Another joked that every time he pisses hot he tries to ” tell the police it’s just my mentality but that never works.”

One person even replied with a factoid regarding urine and its normal temperature.

Fun fact: Your body will keep your pee at 98 degrees before it attempts to heat up the rest of your body. So if your cold and have to pee, go pee and you’ll warm up faster.

Interestingly enough, this was not the first time that LaFleur brought up the bathroom habits of his players this season. Ahead of his team’s season opener, he wanted to be sure that his players were peeing a certain color.