Matt Leinart ‘Shocked’ That USC Hired Lincoln Riley, Thought Trojans Were Hiring Someone Else Just A Day Prior 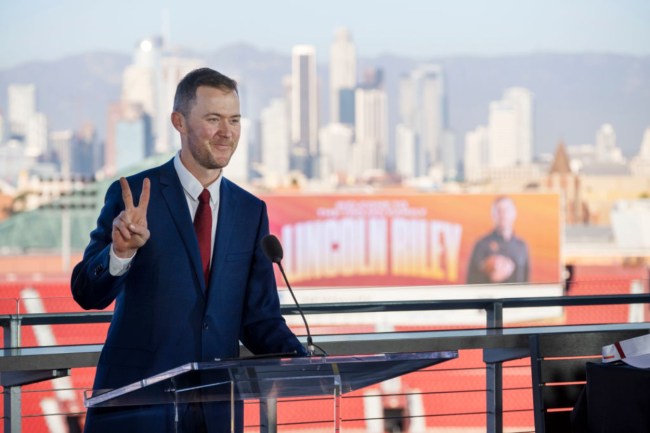 The first major college football coaching change came courtesy of Lincoln Riley and the USC Trojans. Riley was reportedly on LSU’s shortlist of candidates, and many believed that if Riley was going to leave Oklahoma it would be for the gig down in Baton Rouge, but instead, he decided to bolt for LA and take over at USC.

Riley’s move out to Los Angeles was a surprise, to say the least, and it even surprised a person in the know at USC, Matt Leinart.

Leinart, who won the Heisman Trophy while at USC in 2004, joined ‘The Pat McAfee Show’ on Wednesday to discuss Riley’s move to USC. He explained that USC made it a point to talk to notable alumni about the direction they were going to go, but Leinart didn’t see the university taking the route toward Riley.

Leinart was under the assumption that the Trojans were going to hire Matt Campbell, Iowa State’s head coach. He thought that was the case even just a day prior to the announcement of Riley’s signing.

“They had Lincoln on the radar from day one,” Leinart explained. “I was shocked, to be honest with you, I thought it was going to be Matt Campbell. I was hearing the rumors the day before that Matt Campbell is probably the guy, which I would have been happy with, he’s a really good football coach.”

"USC made it a point to get a lot of feedback from former players such as myself.. I was shocked when they got Lincoln Riley because I heard days before it was gonna be Matt Campbell" ~@MattLeinartQB#PatMcAfeeShowLIVE pic.twitter.com/nk938Mc11Z

It’s interesting that Leinart said that “there had to be conversations in the weeks prior with Lincoln” to set up the move. Riley told Scott Van Pelt shortly after his hiring that it all happened over this past weekend, which nobody is buying.