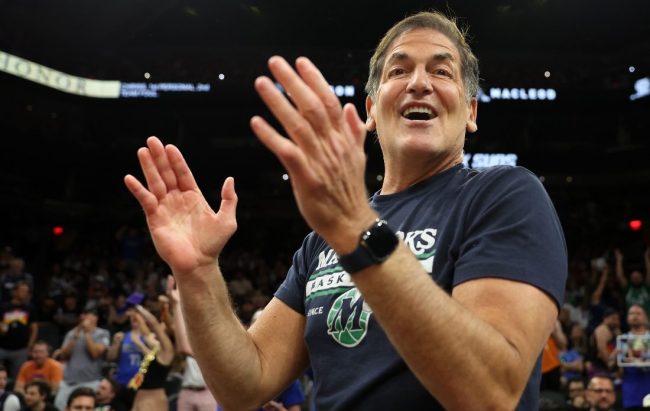 The Dallas Mavericks owner Mark Cuban seems to be one of the most laid-back billionaires out there. Even so, he definitely knows what he’s doing when it comes to business. Additionally, he tells a hilarious story about the time he went out with the team for Juwan Howard’s birthday and things got out of hand quickly.

While getting interviewed by Taylor Brooks, Cuban shares a hilarious story about the time he partied with his team for Juwan Howard’s birthday. The Mavs owner clearly watered down the story (which is hilarious in its own right) but it still sounded like a hell of an evening. At the end of the day, Mark Cuban is just glad this took place before smartphones became a thing.

Cuban likely still hears about puking out of the limo window from his former players. When one of the boys has a rough night it’s only right to remind him about it every so often. We’re sure the Mavericks owner had a fun time with his team, especially in his younger days.

Drinking Wild Turkey by the bottle can definitely send a night over the top. Regardless, it sounds like it was a great time as the Mavericks had a chance to let loose right before the all-star break back in the early 2000s. Mark Cuban likely has plenty of other stories but Juwan Howard’s birthday sounded like a blast.

Maybe we’ll hear a new story one of these days if the Mavericks can get back to the NBA Finals. With Luka Donicic leading the way, you can never truly rule this organization out.