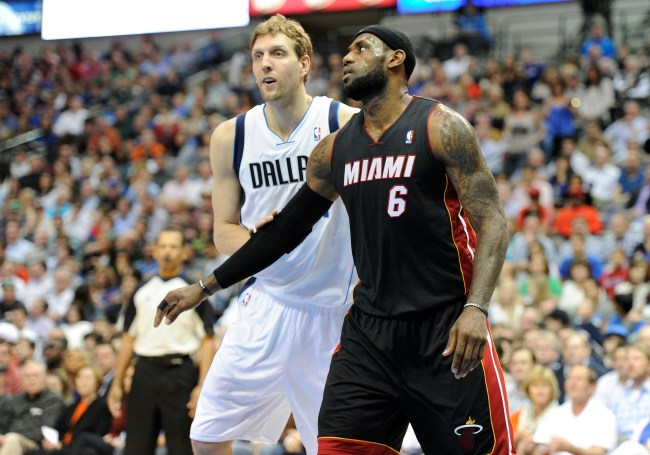 It seems like Mavs legend didn’t think highly of LeBron James and Dwyane Wade while they were in Miami.

According to former Mavs player JJ Barea, who appeared on JJ Redick’s The Old Man And The Three podcast, Dirk hated Miami’s duo of LeBron and Wade during the 2011 season when the Mavs beat the Heat in the finals.

"He hated Miami, he hated LeBron, Wade, Bosh. He’s never going to say that, but he couldn’t stand it." – @jjbareapr on the 2011 NBA Finals run with Dirk Nowitzki

“He was not going to let us lose,” Barea said. “The way he prepared the whole year for it. He hated Miami, he hated LeBron, Wade, Bosh.

“He’s never going to say that, but he couldn’t stand it. He got ready for it, and that year, he don’t talk much. Dirk, if you know him, he leads by example. He don’t lead by talking, but that year in timeouts, and that year before the games, at halftime, he would talk, and he would talk loud, and he’ll point fingers, and he was on one.

“He was special. He had a different mindset that year. He was tougher. He was driving the ball more for some reason. He was either pump-faking and driving left. But when LeBron and Wade started making fun of him by coughing when he got a little sick…that clip really hurt him. He will never say it, but he really saw the tape, and that tape really hurt him, and that gave him a little bit extra that he didn’t need, but it gave him a little extra to finish them off.”

Fans then began sharing moments in which Dirk threw shade at LeBron which included the time he completely ignored LeBron at an All-Star game.

And the time LeBron and Wade mocked Dirk during the Finals for being sick.

…only for Dirk and the Mavs to win the next three games and the title pic.twitter.com/NX9VEPdClQ