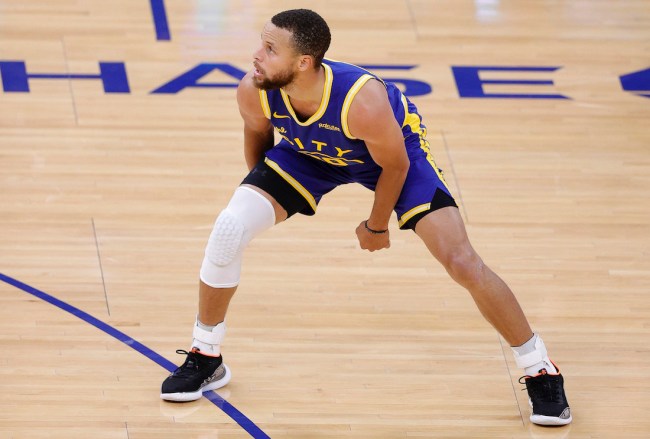 With all due respect to ESPN’s Max Kellerman, the talking head on First Take sure gives some completely asinine takes. Like, remember when he proposed an outrageous Tom Brady-Philip Rivers trade a couple years back? Or when he actually said on air that Kawhi Leonard is more clutch than both Kobe Bryant and LeBron James? Yeah, those are just some of his all-timers.

Well, Kellerman’s at it again, guys, because on Wednesday’s First Take, he and Kendrick Perkins got talking about the upcoming NBA Playoffs, specifically chatting about whether or not the Golden State Warriors should be considered a legit threat or not. After some normal debate between the two, Max dropped this little nugget to try and really get the argument going: Steph Curry has choked in all but one NBA Finals series that he’s played in.

No, really, Max Kellerman went on national TV and declared that Curry — who has won three titles in his career and has played in five NBA Finals’ — hasn’t been as dominating in the championship round as he is during the regular season. Just take a look at the video below, which is queued up to the start of the craziness.

It’s actually unfathomable that Max Kellerman would even suggest this. It has nothing to do with Steph Curry during the regular season — where the sharpshooter often goes mental by draining threes at an insane clip. It has everything to do with the fact that, even during the NBA Finals, when moments get tense and defense is actually played regularly, Curry’s numbers and dominance hasn’t really dipped much. Here are his cumulative stats from the five Finals he’s played in with the Warriors.

For comparison’s sake, Curry’s regular season averages are 24.2-5.7-5.5, so, uh, yeah, not sure what Max Kellerman’s really talking about in his argument above. Like, sure, Steph and Golden State blew that 3-1 series lead in the 2016 NBA Finals against LeBron James’ Cavs — and the Warriors star didn’t play great in the deciding Game 7 — but outside of that game, the dude has been his typical, dominant self.

Max got me hotter than fish grease right now bro.

As one would imagine, upon hearing the scorching hot take from Kellerman, Kendrick Perkins more than disagreed, even removing his jacket so not to sweat profusely while arguing. It’s actually tremendous television.

It’s easy for Max Kellerman to sit up on his soapbox and declare Steph Curry’s not the same player in the NBA Finals as in the regular season. But he’s wrong while doing it, forgetting that the guard has led the Golden State Warriors to three titles, has still averaged 26+ points per game, has either hit those dagger threes or set up a teammate do sink one, and has played tremendously in all but a handful of Finals games.

Curry is an absolute assassin, especially during the most tense moments like the NBA Playoffs or Finals. And after Kellerman dogged him for “choking” on the biggest stage, something tells me we’re about to see vintage Steph as he heads into the postseason again.