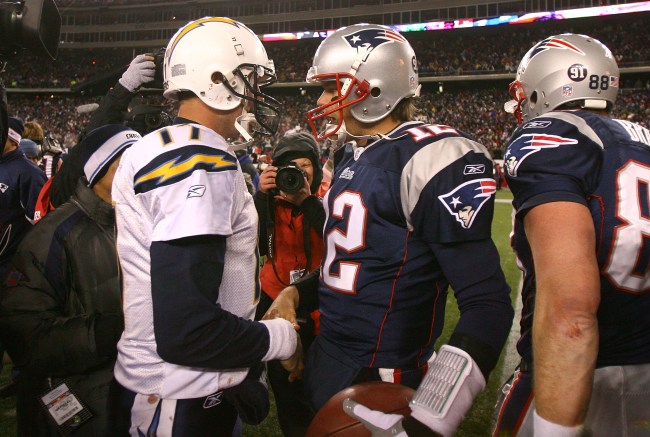 Max Kellerman is actually one of the more enjoyable talents on ESPN, as he’s unafraid to fire back opinions and challenge the always fiery Stephen A. Smith while they’re sitting across from one another on First Take. But, as much as Kellerman can hold his own against Stephen A., like his counterpart, he, too, can say some asinine things that make you wonder if he’s all there. Hey, the case of the Mondays happen to us all.

Maybe that’s what happened to Max Kellerman on First Take Monday morning, because, while discussing a recent report that Tom Brady may bolt the New England Patriots after this season — with Los Angeles being the spot the six-time Super Bowl champ could end up in — Kellerman wonders why the GOAT should wait, and offered up a hypothetical trade scenario that involved Brady and current Los Angeles Chargers quarterback Philip Rivers. The reason? Since people always debate whether it’s Brady or head coach Bill Belichick for being responsible for all the Pats’ success, Kellerman wants to see what would happen if the two signal-callers played for opposite teams.

“It’s always been, ‘Is it more Brady or Belichick?’ I got a solution to figure it out,” Kellerman said Monday on ESPN’s “First Take.” “There have been some rumors that wouldn’t the Los Angeles Chargers be a good place for Tom Brady? Philip Rivers has never gotten over the hump, right? Well, there’s no better experiment to do because their cupboard is bare at backup quarterback in New England, but if Brady went to Los Angeles, Philip Rivers would be available. Let’s see if it’s Brady or Belichick. Send Tom Brady to Los Angeles and we’ll find out who does better, Brady on a loaded team that somehow can’t get it done or Philip Rivers with Belichick. My money is on Philip Rivers with Belichick. Let’s see what happens.”

Given the fact the Patriots just improved to 8-0 and are pretty much a lock to win the AFC East again, New England probably wouldn’t be too interested in swapping Brady for Rivers. But, in Max Kellerman’s defense, the situation does at least make you wonder if Bill Belichick — who’s, arguably, the greatest head coach in NFL history — would be able to have the same success with Rivers as his quarterback.

Still, this isn’t a game of Madden NFL 20, so the whole idea is more so a waste of breath, because this isn’t happening anytime soon. Of course, that doesn’t mean something might not happen in the offseason — as both Rivers and Brady could become free agents — but that’s a discussion for another day.