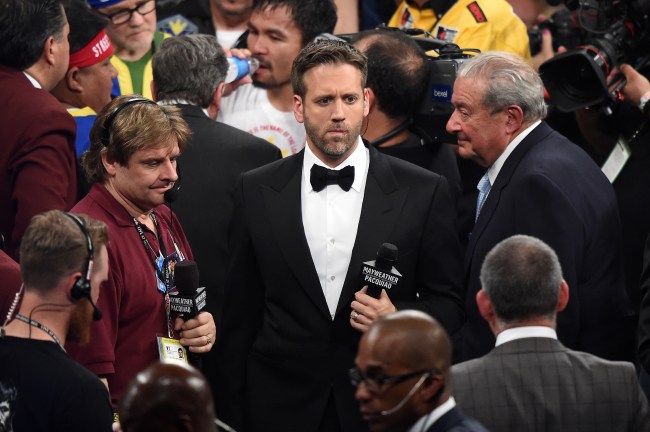 Max Kellerman didn’t make many new friends this morning, guys. While the ESPN personality is known for ruffling some feathers every once in a while, on First Take today, he went bold AF — and caused quite the uproar among people in the track and field community.

While speaking about which athlete is the most electric ever, Kellerman tosses out names like Tiger Woods and Usain Bolt — which, generally speaking, could be argued as being two of the most electric athletes of all-time. But then Max Kellerman took things a whole new level, talking about how someone being fast and running from point A to point B is just a “linear talent,” and that it doesn’t measure other instincts or skills that other athletes need to do during a contest.

OK, fair enough, just leave it at that, right? Well… you know that feeling when you really think you’re on a roll and you’ve got something big to say? Kellerman went there, continuing his thoughts above by claiming that most track and field stars are just failed football and basketball players. Take a look below at the full comment.

ESPN’s Max Kellerman says track is not a sport and you only get into it because you’re a failure of an athlete and not tough enough…dumbest thing I’ve ever heard. pic.twitter.com/xRpiMO0Lnn

Oh man, Max, you sure set people off with that hot take, because social media had some thoughts.

Once people saw the video of Kellerman’s claim, they really let him have it, absolutely ripping the ESPN talent — with some even calling him out for being a failed rapper turned sports commentator. Take a look at some of the stuff people were saying on Twitter below.

@maxkellerman you need to educate yourself mate! You don’t know what you’re talking about

That is the biggest bunch of human fecal matter I’ve ever heard.The truth is,persons like Max act as if they are an authority in everything but they are https://t.co/FwITBp3dJQ’s like him trying to rap and he failed https://t.co/EJKaUaZNrh he settled for being a commentator.

Trust me when I say this. There is No NFL player that can match the speed of the top sprinters. Thats just ignorance talking

Look, Max Kellerman is paid to say things like this and get people talking online and on social media, so he did his job here. Who knows if he even believes his own words here, but, if he does, damn, he needs some education, because track and field athletes are some of the fittest, most mentally strong people on the planet, capable of pushing themselves to limits most of us could only imagine — and Kellerman missed that with his opinion on First Take this morning.

The good news? Maybe we see a track and field star challenge Kellerman to a race to show the guy how tough the training really is; and then goes and squash him in a 100-meter sprint. Maybe that’ll make people who didn’t find Max’s words too amusing happy to see.