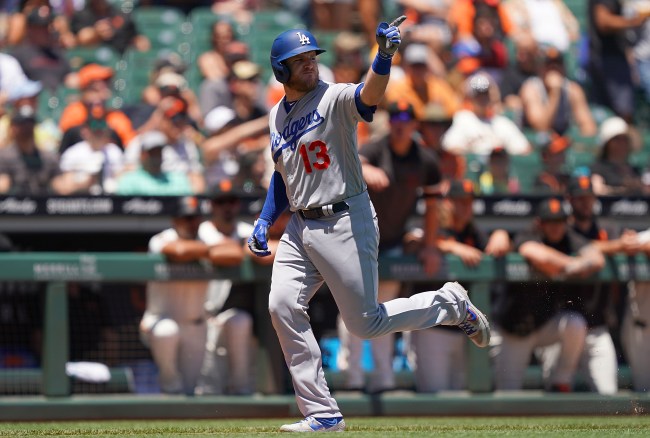 The tireless debate over the unwritten rules of baseball was pushed to the forefront yet again after Dodgers’ Max Muncy crushed a Madison Bumgarner pitch over the right-field wall and into San Francisco Bay.

Muncy took no more than two steps to admire the moonshot, and this upset the perpetually irritable Bumgarner, who expected the Dodgers infielder to sheepishly apologize before putting his head down in shame while he rounded the bags.

Muncy’s who effectively be the game-winning run in the Dodgers 1-0 victory. After the game, the 28-year-old twisted the knife by mocking Bumgarner’s butt hurt reaction.

“Honestly, I thought it was probably one of my tamer bat-flips that I’ve ever done. I didn’t actually think it was anything outrageous. I took one or two steps out of the box, started jogging, and that was really all it was.”

The Giants pitcher argued his case:

“He just struck a pose and walked further than I liked,” Bumgarner said.

“They want to let everybody be themselves. Let me be myself,” Bumgarner said. “I just as soon fight than walk or whatever. Just do your thing, I’ll do mine.”

The internet is sick of Bumgarner throwing a temper tantrum every time someone takes him yard.

I am so tired of everyone making excuses for Madison Bumgarner. If anyone hits a HR against him somehow it’s an insult. His behavior is completely inappropriate. MadBum got mad at Max Muncy because he took him deep. Muncy didn’t show him up at all. Bumgarner needs to zip it.

Madison Bumgarner picks more pointless fights with opposing players (and umpires) than anyone in the league, but somehow just gets covered as a “tough competitor.” https://t.co/mNxZzqcBCR

“Madison Bumgarner is going to continue to sit there and be the old man shouting from the porch.”

–@JeffPassan on Bumgarner being a “hardo” pic.twitter.com/Dfvme7oqCI