A Shirtless, Soon-To-Be-Drunk Max Scherzer Had An All-Time Quote About Starting NLDS Game 1 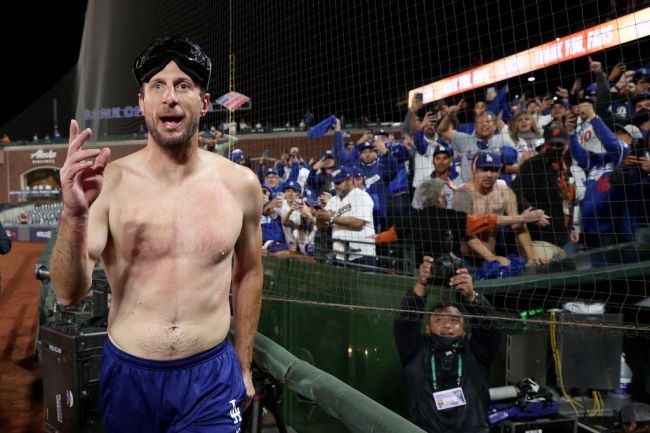 Washington and Los Angeles finalized a deal for Max Scherzer on July 30th. Since then, the 37-year-old has been a crucial component in the Dodgers’ postseason run, including a save in Game 5 of the NLDS.

Manager Dave Roberts previously had said that his prized arm was unavailable for the game, but that was a lie from the beginning.

Around the eighth inning, the bullpen began to stir and Scherzer began to get loose. Come the ninth inning, Mad Max toed the rubber, closed out a 2-1 win and sent Los Angeles to the NLCS.

After the game, much like after the Wild Card win, Scherzer was ready to party. He was immediately mobbed by his teammates on the mound.

Celebrate with Mad Max and the Dodgers. pic.twitter.com/7eNqbpXghn

And not long thereafter, Scherzer’s shirt was nowhere to be found. Again.

When it came time to address the media, Scherzer had only one thing on his mind. He wanted to turn the f**k up!

Los Angeles will play Atlanta in Game 1 of the NLCS on Saturday and there is a big question looming: Will Scherzer be available?

Scherzer, who threw 13 pitches around 10:30pm PT, would typically be the Dodgers’ No. 1 starter. However, because he threw on Thursday night, he might not be able to go on Saturday.

The question of whether Scherzer can start on a two-day turnaround remains unanswered, because the focus stayed on the party. In response to his availability, Mad Max had an incredible answer.

#Dodgers Max Scherzer on whether he can start NLCS Game 1 Saturday: "I don’t know. Party tonight, figure it out tomorrow."
(h/t @jphoornstra)

What an all-time quote from an all-time MLB legend. Scherzer won the World Series with the Nationals in 2019 and would like to add another to his resume this season.

Just imagine what the party would be like if the Dodgers win.