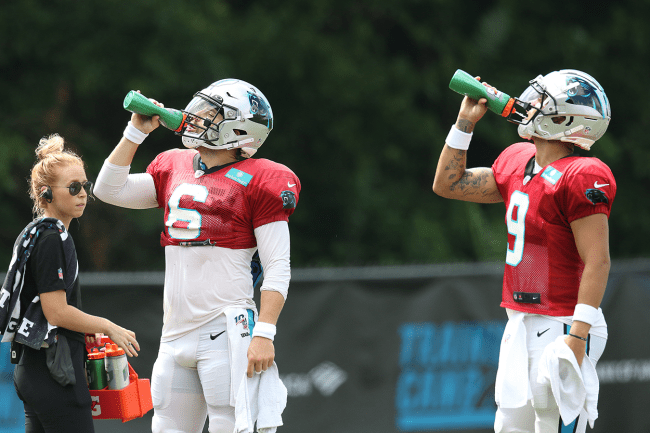 Coming out of college, there was a lot of chatter about Baker Mayfield’s character. There were multiple reports and opinion articles that were released as the former Heisman Trophy winner was eyeing a home in the NFL, but he ended up going first overall anyway.

Since being drafted No. 1 in 2018, Mayfield has had a very interesting career. Even though his on-field win-loss record is below .500 and he has struggled to take his game to the next level, there is no knocking his character.

By all accounts, Mayfield is a leader and his teammates like him. Maybe not Odell Beckham Jr. or his dad, but that may be the only definitive case.

Now that Mayfield is on a different team, he has to reestablish himself as a mentor and as someone who has his guys’ backs. That leadership was on full display during a recent segment from training camp.

As the Panthers hold a quarterback battle between Mayfield and Sam Darnold, a rookie is waiting in the wings. Matt Corral was drafted in the third round back in April and could blossom into a fantastic starting NFL quarterback. He has been lighting it up.

But he isn’t quite ready just yet and the team knows that. It plans to start Mayfield or Darnold in 2022 with Corral learning behind the two veterans.

Despite the team’s plan to have Matt Corral begin his career on the bench, the two vets don’t have to mentor the rookie.

We saw earlier this year with Ryan Tannehill that some are not overly willing to do so. But that is not the case with Mayfield.

During a recent mic’d up practice that was documented in Carolina’s inside look at training camp, Darnold and Mayfield are battling it out alongside Corral. At one point during the afternoon, Mayfield took Corral aside and walked him through a lesson about something on which the rookie can improve.

Not only was the mentorship moment really cool to hear up close, it provides a great look at Mayfield’s character. He is stepping into a new team, in the middle of a quarterback competition, with a rookie breathing down his neck. That didn’t stop him from teaching the man who could one day succeed him.