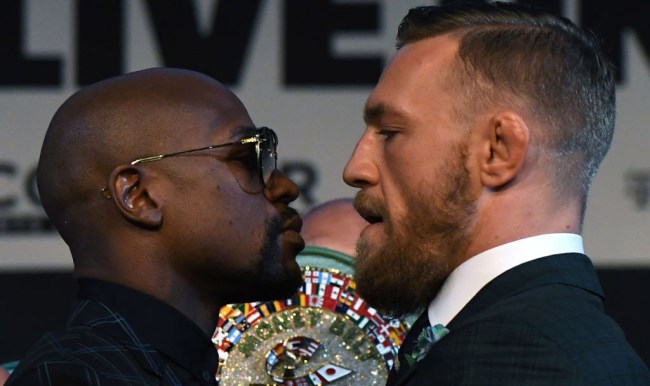 After sparring on Twitter on Tuesday during the day, Floyd Mayweather and Conor McGregor moved their trash talk to Instagram Tuesday night where Conor dropped an always appreciated ‘deez nuts’ reference on Floyd.

In case you missed it, this little rivalry got fired up again on social media Tuesday when, for some reason, Mayweather decided to just randomly troll McGregor over an old report that he was being threatened by the Kinahan cartel in Ireland. Apparently, Floyd must have been having a slow day. Maybe he ran out of candy or couldn’t think of anyone else to challenge to a million dollar game of one-on-one.

Anyway, as was the case prior to the two of them fighting, Mayweather and McGregor were more entertaining yet again outside the ring than in it.

After their little Twitter tussle, it seemed that they were done with the trash talk, but later in the evening, Mayweather, who really needs to find a hobby or something, decided to ramp things up even more when he switched over to Instagram to continue his trash talk.

“You violate and I will demonstrate!!”

“Please, can somebody give me a caption?”

“The new King of Ireland, it took me only 28 minutes.”

He does know that they already fought, right? Like four months ago.

Anyway, as was the case earlier in the day on Twitter when he replied with just four words, McGregor once again was brief in his response, yet still managed to score…

Have to once again give this round to McGregor, but I am issuing him a warning that if he is going to use “deez nuts” jokes in his verbal warfare with Mayweather he needs to use stop using the word “these” and use the proper “deez” next time.

Maybe McGregor just forget the proper terminology because was just still shook from his shirtless pose-down with Richard Branson earlier in the day.

I’d sure like to visit Floyd and Conor’s world sometime. It seems like a very interesting place.