Floyd Mayweather Trolls McGregor Over Threats From The Irish Cartel, Conor Fires Back 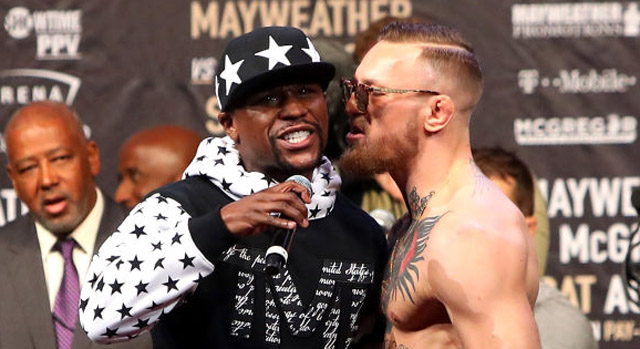 They may be done fighting one another (at least we hope so), but that doesn’t mean Floyd Mayweather and Conor McGregor are against still trading haymakers on social media now and then. I guess despite the fact that Mayweather honored McGregor with a GIANT painting of “The Notorious One” in his mansion, he still has a few more jabs to throw the Irishman’s way.

And jab he most certainly did on Wednesday when he dropped a caustic tweet about McGregor having his life threatened by the Kinahan cartel in Ireland after he allegedly struck a senior member of the cartel’s father at a Dublin pub.

McGregor subsequently laughed off the report, saying, “Come and get me,” when asked about it by a reporter.

Conor McGregor @TheNotoriousMMA drives away from court, saying ‘Come and get me’ pic.twitter.com/ee41k2WYwK

Mayweather was also laughing at the situation on Wednesday as well, sending out this tweet which read, “I already fucked you up in 2017 now they about to fuck you up in 2018. You’re about to start your new year off with a bang 🔪🔨⛏💣⚰️.”

I already fucked you up in 2017 now they about to fuck you up in 2018. You’re about to start your new year off with a bang 🔪🔨⛏💣⚰️ pic.twitter.com/upaRfLbgvJ

Shin bone to the cheek bone. The rule set kept you out the funeral home. pic.twitter.com/chJ5ieUQvQ

Of course, within moments, McGregor fired back at Mayweather pretty much the way you’d expect him to respond…

I am the cartel.

Now please tell us that all Dana White’s talk about Floyd taking on McGregor in the octagon is 100% nonsense.

Oh, and maybe at some point before we all grow old and decrepit, maybe McGregor could actually fight for the UFC lightweight championship that he won on November 12th, 2016 and hasn’t defended one-time since. That would be good too.