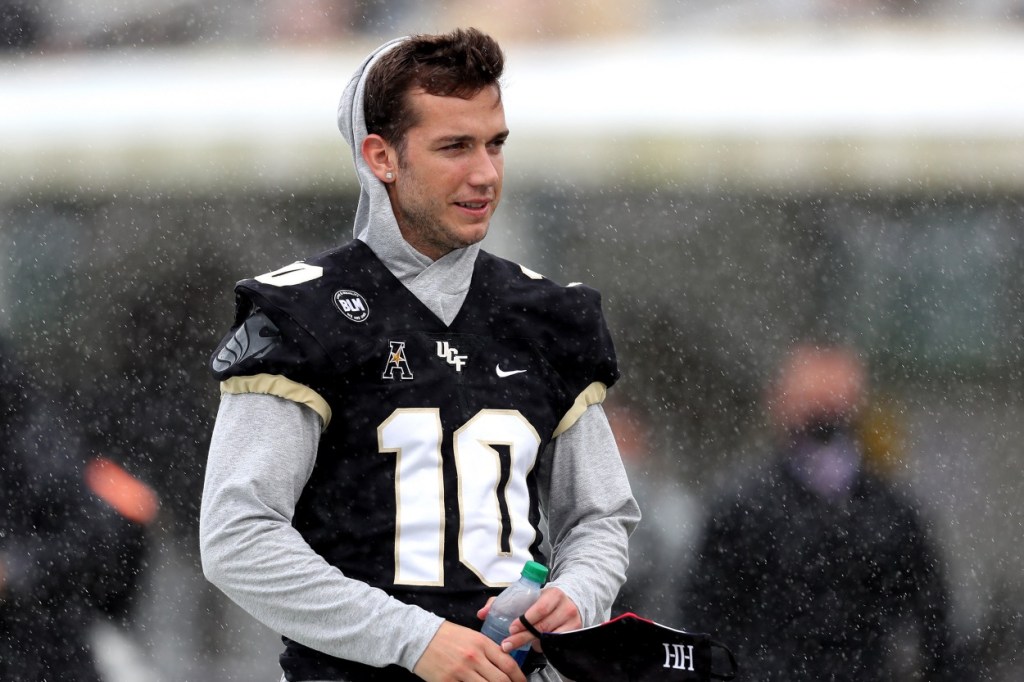 I’ve always thought that the University of Southern California and the University of Miami should be able to bring in top-5 recruiting classes every single year based entirely on their campus locations and quality of life. Former UCF and FSU quarterback McKenzie Milton would probably add UCF to my list and claim the rapidly rising popularity of Orlando makes it a deserving addition.

This all started when McKenzie Milton went on 96.9 The Game which is the ‘radio home of UCF, Orlando Magic, TB Bucs, and Orlando City’ and discussed the new NIL (Name, Image, and Likeness) collective for University of Central Florida athletes.

McKenzie Milton’s quote below started pretty vaguely. He was hyping up the city of Orlando, which to everyone outside of the state of Florida seems like a great place to live, and not really disparaging any one city or school in particular. But Mike Bianchi pressed him further and asked about Nebraska to which Milton dragged the Oklahoma Sooners into the discussion.

McKenzie Milton Drags The Oklahoma Sooners With A Dose Of Reality

These are the initial comments and he clarified his position below.

Much more to come from McKenzie Milton's appearance on @969thegame in which he discussed a new NIL collective for #UCF athletes… but this back and forth caught my attention: pic.twitter.com/ozFrTGaKED

This is an argument that could go on forever but objectively speaking, Orlando is a better place to live as a college student than Norman, Oklahoma. At the end of the day, college towns are pretty insulated from the outside world, and at OU that 100% benefits the athletes. They’re big fish in a small pond (population of 122K), and the city of Orlando has more to do. Norman, Oklahoma might be a better choice for thousands of people but if you polled every NCAAF recruit in America on which was a more fun place to live as an athlete the answer would likely be Orlando.

McKenzie Milton started getting replies about his comments so he took to Twitter to back up what he said.

Milton says “it’s not shade” while dragging OU and Nebraska…

McKenzie Milton hopped back into the fray and added “Not shade y’all it’s fact. There’s a reason Orlando is the fastest growing city in comparison to these other places. I’m sorry but the only recruiting pitch with these blue bloods have is that they are just that. No one is jumping out of their seat to move to Lincoln or Norman 🤷🏻‍♂️” while quote tweeting the initial comments:

Not shade y’all it’s fact. There’s a reason Orlando is the fastest growing city in comparison to these other places. I’m sorry but the only recruiting pitch with these blue bloods have is that they are just that. No one is jumping out of their seat to move to Lincoln or Norman 🤷🏻‍♂️ https://t.co/cXpqPUxLVj

He’s wrong about one thing here. There are A LOT of recruits who would kill for the chance to play for the Oklahoma Sooners and Nebraska Cornhuskers. Both of those programs are historically great with OU being top tier. The University of Central Florida football team is still a toddler compared to those programs even if they’ve seen immense success in recent years.

To say that nobody’s ‘jumping out of their seat’ to move there ignores the fact that athletes move there in a heartbeat if they’re recruited to a top-tier team.

What’s everyone saying about McKenzie Milton’s comments about OU and Nebraska?

The state of Florida in general. We as a state have a lot more going on than places like Oklahoma, Nebraska, and Iowa. You may be able to sell recruits on other things, but experiences, weather, etc. ain’t one of them.

why develop into a 1st rounder when you can go surfing?

As a born and raised Floridian in a multi-generational native Floridian family, I can say with full confidence that Disney World is actually one of the most overrated places on the entire planet.

Come to UCF and remember … Disenyworld it’s the greatest place on earth ! Love my Knights

Bill they have a national champ….LMAO sorry i tried to type that out without laughing

That’s his alma mater? Do your homework

“I was never offered by Oklahoma”

Flip Flops are a known killer of socks. Sad but true. 😏

At the end of the day, Oklahoma is leaving the Big 12 for the SEC along with Texas and the allure of the SEC is enormous. We can talk about living conditions all day but top recruits have their eyes on the NFL and the SEC gets them there faster than most conferences.

And with regards to college, it’s not always about weather, is it? Some recruits want to be close to their families. Plenty of ‘croots want to follow the legacy of other historically great players at their positions or they go to a program because of a specific coach. If it was all about the weather, wouldn’t every recruit go to Miami or USC?