Mel Kiper Jr. Explains Why He Has Justin Fields Ahead Of Zach Wilson In His NFL Mock Draft 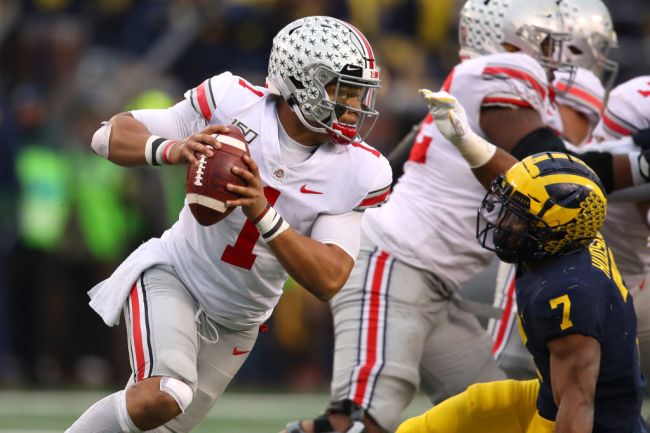 Trevor Lawrence has been the assumed first overall pick in the 2021 NFL Draft for quite some time now, and became a lock to go No. 1 overall one the Jaguars locked up the top spot in the draft. Now the most heated debate involving quarterbacks heading into April’s draft stems around Justin Fields and Zach Wilson and which QB should have his name called first.

Fields had a fantastic 2019 season, but most agree he wasn’t as consistent during the unique, COVID-19 influenced 2020 campaign. Wilson on the other hand had a stellar campaign in 2020 and plenty of draft analysts have given him the nod over Fields heading into the 2021 NFL Draft, but not Mel Kiper Jr., at least not yet.

ESPN’s NFL Draft expert has been high on Fields for years now and still gives him a slight edge over Wilson. He explained why he still gives Fields the nod against Wilson on the latest episode of the First Draft podcast.

“It’s a hard one,” Kiper explained, per Saturday Tradition. “I had Fields (ahead of Zach Wilson) all along. My thing was do I go with a quarterback who was more impressive against cupcakes and can spin it, and is athletic, basketball background in high school with Zach Wilson, or Justin Fields, who was remarkable in 2019. And I don’t want to excuse away not having Chris Olave (in the Big Ten Championship Game) that should not have been enough for the (struggles in the) Northwestern game. But the interrupted season at Ohio State, the COVID issues, not knowing who you’re playing, who’s in who’s out…all the things that went on this year that made it a very difficult season; then to see him play the way they did against Clemson on the same field with Trevor Lawrence.

“And I haven’t seen pro days yet,” Kiper continued. “Measurables we haven’t gotten yet. Bottom line is, this is kind of like Affirmed and Alydar. I always reference the Triple Crown races because it was that close. It’s that close with these two quarterbacks, I believe, in Justin Fields and Zach Wilson coming down the stretch.”