The Way Mel Kiper Jr. Eats His Pizza Proves The Man Lives In His Own Little World 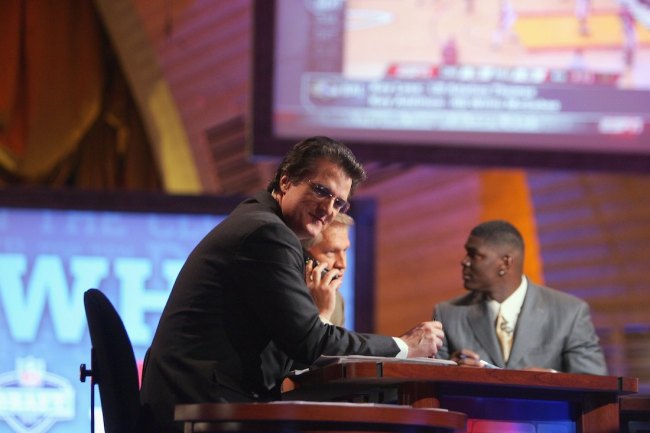 Mel Kiper Jr. is the definitive guru when it comes to the NFL Draft, with football fans trusting his analysis for the past 30+ years. While Kiper doesn’t take a backseat to anybody when it comes to talking draft prospects, doing so over a slice of pizza with the guy would be a little bit, uh, disgusting, because he recently talked about some of the toppings he includes and it’s mortifying.

Joining his ESPN colleague, Pablo Torre, on ESPN Daily on Friday, Mel Kiper Jr. took a break from talking about the NFL Draft and, instead, began chatting about the way he eats his pizza. Now, look, everybody has their own way of doing things when it comes to the toppings they put on their ‘za, but Kiper revealed that he doesn’t just remove most of the cheese to try and be healthier, but then he piles on MASHED POTATOES with a little cheese sprinkled on top for flavor.

“So mashed potatoes and pizza without cheese is what I do,” he told Torre. “I think I’m healthy because I’m not eating the cheese, right? I don’t eat the cheese, I just leave a little on there for the flavor. The cheese does give you the flavor, I do leave a little bit on … it’s mostly just the sauce and the dough, and then I put the mashed potatoes on it, and that’s what I do.”

How on earth is Mel Kiper Jr. serious with this? Of all the weird ways people eat pizza — and there are some crazy ones out there — the resident NFL Draft expert at the world’s biggest sports media company outdoes them all. This guy should be doing a weird foods show instead of talking about football. If he eats his pizza this way, what other strange things is he doing with his grub? I almost don’t want to know the answer.

Here’s the thing: One of Kiper’s other colleagues at ESPN, Dan Orlovsky, actually agrees with this whole mashed potatoes on pizza thing. Take a look below at some tweets about all of this.

Remember: Get the pizza with cheese, THEN take it off — and add the mashed potatoes. Give it a shot.

Here’s a tip for any future ESPN employees: When either Mel Kiper Jr. or Dan Orlovsky invite you to grab pizza at lunch, don’t take the bait. Sure, you’ll (presumably) get a free meal, but at what expense given you’d have to join them in eating a mountain of mashed potatoes on each slice? I’ll pass and just stick to old reliable; pepperoni and sausage with extra cheese.