What Should We Make Of NFL Draft Guru Mel Kiper Jr. Claiming Mac Jones Has A Little Bit Of Tom Brady In Him? 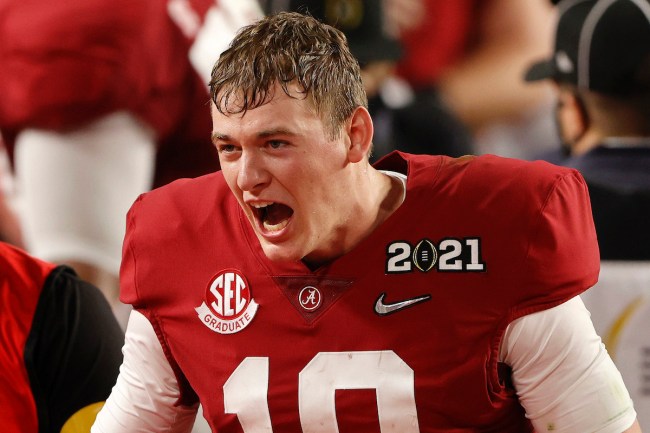 Considering Mac Jones stepped right in for the Alabama Crimson Tide and led them to a National Championship after the program lost a top-5 pick in Tua Tagovailoa the year before tells you a little something about the kid. He’s got tons of talent. He’s got moxie. He’s got leadership skills. He’s a winner. Add all those things up, and you get a projected first-round pick in the upcoming 2021 NFL Draft.

Now, every single year leading up to the draft, we hear wild comparisons of incoming prospects displaying skills of Hall of Famers. Like death and taxes, one of life’s guarantees is this insane practice from analysts and talking heads on the Internet — even players like Tagovailoa himself. But, hey, it generates interest and gets football fans excited to imagine having the next Joe Montana or Lawrence Taylor on their favorite team, so it’ll never go out of style.

One of the predominant NFL Draft gurus, Mel Kiper Jr., took things to a whole new level over the weekend, though, not only comparing Mac Jones to Tom Brady — you know, that guy with seven Super Bowl titles and the distinction as the GOAT — but then had the gall to actually describe some of those shared traits. Take a look below.

“I hate to say, but he kind of has a little bit of [Tom] Brady in him,” Kiper said, via ESPN. “I’m not saying he’s ever going to be Tom Brady. He wouldn’t be close, probably. But he has that competitiveness, and he’s so smart — he picked that offense up [at the Senior Bowl] like it was nothing. Other quarterbacks were struggling with the verbiage and — boom! — he was in and out of the huddle quicker than anybody I’ve ever seen.

“Then he sees the field. He’s tremendously accurate to all levels. He doesn’t have the ‘wow’ arm, like Brady didn’t either coming into the league. And like Brady, he’s not real mobile, not a runner. But biding time, slipping and sliding, he did it in the championship game. So there are some similarities there.”

I don’t want to diminish some of the talent of Mac Jones, but, sheesh, imagine being the Bama quarterback and hearing your name mentioned in the same sentence as Tom Brady’s? It has to be surreal, but it’s also go to feel a little bit absurd. I know it’s part of the territory for top prospects, but, c’mon, that’s some craziness.

Mac Jones may become a very good NFL quarterback. He may even become a Pro Bowler or, 20 years from now, could end up vying for a spot in the Hall of Fame. But let’s not twist things by comparing a 20-something-year-old kid to a legend like Tom Brady, who’s still on top of the league at age 43 and is a player like none of us have ever seen before.