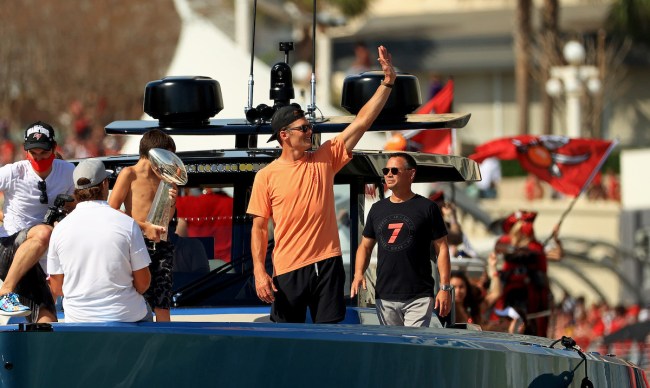 Anybody who watched the Buccaneers’ Super Bowl 55 parade saw Tom Brady converting back to Johnny College, with the quarterback tossing back more than a few cold ones as he partied with his teammates. In other words, the 43-year-old gave the people what they want: Lots and lots of A+ content.

Drunk Tom Brady fall off his TB12 diet and pulled the 🤞 to Antoine Winfield.pic.twitter.com/DdueoBOUWy

Good on Tommy Boy, man, because the dude just won his seventh Super Bowl title, only further adding to his legacy as the GOAT, so he should go H.A.M. for the next couple weeks if he wants to. Nobody knows for sure if this will be his last title as he continues to fight Father Time, so, if it is, why not celebrate until the cops tell you to stop, right?

While Brady didn’t quite reach public intoxication levels (that any of us know of), he did appear to be completely hammered during the championship parade. From tossing the Lombardi Trophy from boat to boat, to generally looking like a coed the night of an all-day tailgate, Tom Brady showed that, deep down, he may actually not be a robot.

But going ape during the parade is one thing. It’s a different level when a person decides to take to social media to publicly display their drunkenness — and all of us have absolutely been there. If you need a reminder, check your “Memories” on Facebook, dudes. And although Tom Brady may not have actually written the tweet below, it deserves its own MVP award for being absolutely perfecto.

Not to crap all over the Chiefs or anything, but that’s the most uncomfortable Tom Brady’s looked standing upright since… well, probably his last Super Bowl championship parade. But, as mentioned above, who cares, because Brady is, once again, the King of the NFL.

Sure, Gronk gets a lot of (deserved) attention for being a party animal, but don’t underestimate Brady, who has let down his guard in a few instances with some legendary drinking stories. We all got to see that version of Tommy today during the Buccaneers’ Super Bowl 55 parade, and it was actually a little refreshing — so party on, Tom.

Here’s to hoping the old man has some ibuprofen handy to nurse what’s expected to be a little bit of a hangover this evening and into tomorrow. Or maybe he’ll just down some weird TB12 meals and get himself back to 100 and out on the field tomorrow morning before everybody else like he always does? Yeah, somehow, Brady’s bounce back game is probably a helluva lot better than yours or mine.