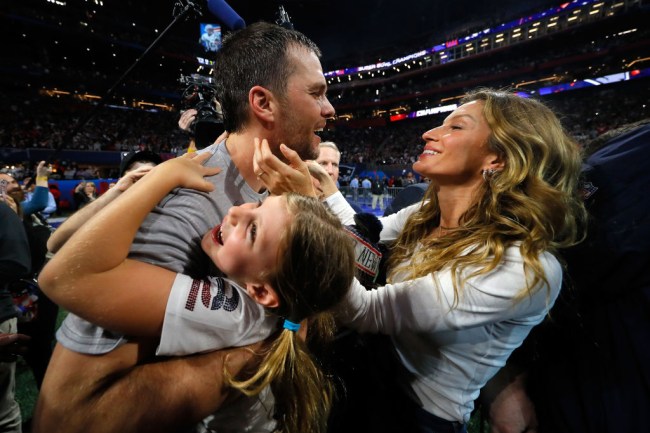 Over the past couple of decades, Tom Brady has established himself as probably the best quarterback to ever play in the NFL as he continues to rack up Super Bowl wins and smash records like a concerned mother from the 70s who thought rock and roll was the devil’s music.

During his playing career, Brady has also established himself as one of the weirdest dudes to ever play the game by doing things like avoiding strawberries at all costs, kissing a kid who’s too old to be kissed on the lips on the lips, and taking shots of water at a bar (presumably to stop himself from getting a sunburn).

There’s also the infamous TB12 Method, an avocado ice cream-filled diet/lifestyle Brady has subscribed to in order to maximize his longevity despite the best efforts of Bill Belichick.

However, according to CBS Sports, the TB12 Method isn’t the only unorthodox strategy Brady utilizes to give himself a competitive edge thanks to his wife Gisele, who has apparently come up with a method of her own to give her husband an edge over the competition:

“I have these little special stones and healing stones and protection stones and she has me wear a necklace and take these drops she makes and say all these mantras.”

Brady, who probably has a Goop subscription, was skeptical at first until he contracted a strong case of confirmation bias after the Pats managed to top the Seahawks in what was presumably Super Bowl XLIX:

“[A]bout four years ago, we were playing the Seahawks and she said ‘You better listen to me: This is your year, but this is all the things you’re going to have to do to win,’ and I did all those things, and by God, you know, it worked.”

Say what you will but you can’t really argue with the results.