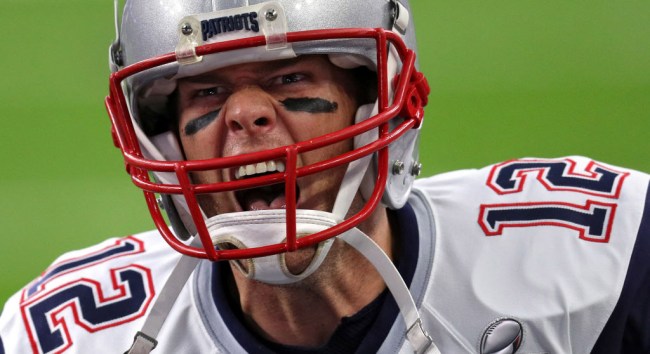 New England Patriots quarterback Tom Brady has a very, ummm, unique diet. We know this because it has been well-chronicled thanks to his boss self-help book The TB12 Method: How to Achieve a Lifetime of Sustained Peak Performance.

In his book we learn about his love of avocados, the potentially deadly amount of water he consumes daily (which he says helps to prevent him from getting sunburned), and other odd ways Brady maintains his fitness into his forties.

We also know, thanks to his recent appearance on The Late Show With Stephen Colbert that TB12 absolutely hates strawberries (though he will eat the occasional cheeseburger…don’t try to make sense of it). On the show, while Brady did actually take a bite of a strawberry (which he did indeed seem to hate), he didn’t give any explanation as to why he strawberries have zero place in the TB12 Method.

However, Brady, who is still making the media rounds promoting his new cult, I mean book and fitness app, appeared on NPR’s Wait Wait … Don’t Tell Me! and host Peter Sagal asked him about his Late Show appearance to explain his unusual disdain for strawberries.

“When I – see, I grew up in California. And I had an aunt that lived in Central California. And when she’d drive to see us, she would stop at the fruit stands on the side of the road, and she’d get these big trays of strawberries. And she’d bring them up to our house, and she would put them into our refrigerator. And every time the refrigerator door was opened, the smell of strawberries would permeate the room. And I could not stand it,” revealed Brady. “And since then, I’ve never eaten a strawberry. The thought of a strawberry is just – is … terrible for me. And the fact that I actually did it the other night – I couldn’t believe it, either, so that’s what made it most surprising for me.”

“Yeah. And how did it taste after how many years?” asked Sagal.

“And so what was your reaction? I mean, was this like a trauma in the house, or…” asked Mo Rocca.

“It was. No. The problem is I tasted it for, like, the next 30 minutes, too,” said Brady. “It just was sitting right there in my throat.”

Sagal then joked that defensive coordinators who are plotting right now to douse their team uniforms with the scent of strawberries.

Brady agreed that would be smart, but added “most defensive coordinators are not smart.”

Check out the entire very interesting, and entertaining, interview below.