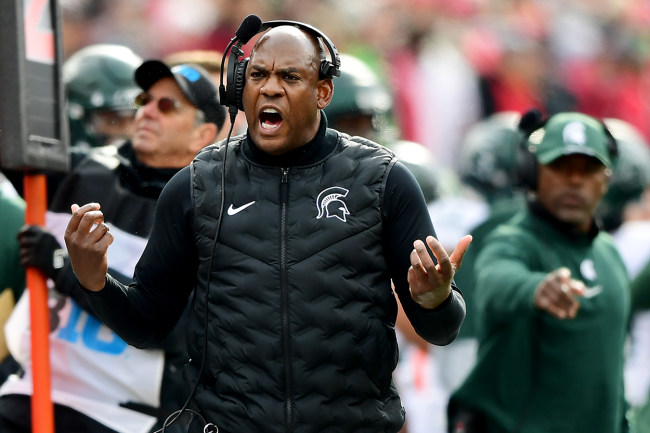 Michigan State head coach Mel Tucker is not ready to publicly discuss any potential contract extensions. His decision not to talk about any sort of pay raise comes just a few days after his Spartans team got blown out by Ohio State.

Tucker, who took a lot of heat for the embarrassing loss, has reportedly been targeted by several of the top college football programs with job openings this offseason. As a result, according to the Detroit Free Press, Michigan State offered him a MASSIVE contract extension.

The 10-year, $95 million deal would make Tucker the second-highest paid college football coach in the country. The only person who would be making more money is his former boss, Nick Saban.

After losing to the Buckeyes by 49, there was a lot of hullabaloo around the extension. When he was asked about the reported offer after the brutal loss, Tucker completely dodged any questions.

“That’s not my focus, and that’s not the focus of my team,” Tucker said this week. “I’m not thinking about anything right now. I’m not focusing on anything other than our upcoming opponent. That’s the only thing that I’m thinking about.”

It sounds like Tucker learned a lot from Saban about coach speak. He did not offer even a window into the extension.

After the contract was first reported last week, Tucker spoke about the Spartans on The Draymond Green show and had nothing but positive things to say.

"I always made it clear that MSU is a destination job, not a stepping stone… It was never my intention to come here and just pass through." pic.twitter.com/121Yx3ZsK6

The real question is not whether Tucker is leaving, it is whether the Ohio State loss affected his massive payday. Tucker isn’t interested in talking about it.