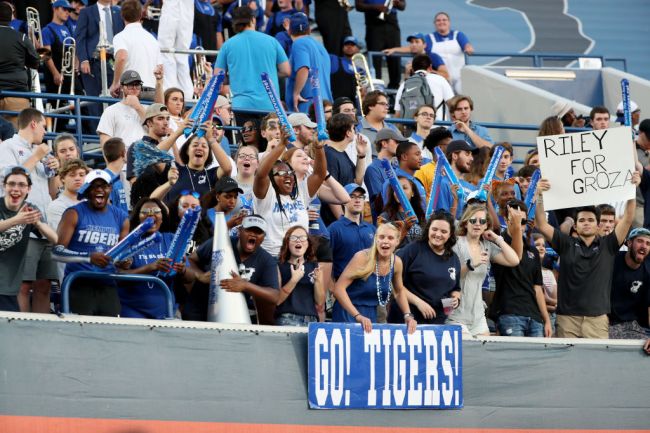 The Memphis Tigers might be 3-0 on the gridiron, but they can’t stop taking Ls.

Not only did a vicious 1-on-5 fight break out amongst fans in the stands two weeks ago, but the redheaded stepchild of Tennessee was left out of Big 12 expansion a few days later. Now, this past Saturday, its fans were made a laughing stock by the security and coaches on the field.

Before I dive into the hilarious video, I have to give some credit to the Tigers. Although they probably shouldn’t have, they did beat Mississippi State, which is something we can all get behind.

After Saturday’s win over the Bulldogs, two shirtless fans decided to hop onto the sideline. One of them made it down about 40 yards before climbing back into the stands.

The other did not.

Upon jumping the barricade, what appears to be an assistant coach or staffer for Memphis absolutely manhandled him. He grabs the shirtless fan on the left shoulder and pulls him back into his grip.

With him completely wrapped up, the staffer picks him up like a rag doll. He literally carries him as if he is a dog that needs to get loaded into the car.

Then the staffer puts him down, regains his grip on the out-muscled fan and places him back into the crowd. It was completely demoralizing and extremely funny.

There is a good chance that Memphis could run the table this year. The Tigers don’t play Cincinnati during the regular season and very well might win out.

However, considering that its conference has crumbled around Memphis and its fans are getting embarrassed like that, does it really matter? Such an L.