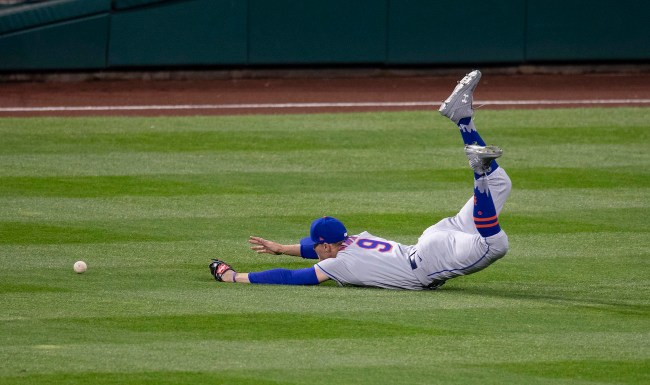 Sure, it might’ve taken an extra couple of days, but similar to Thanos in Avengers: Infinity War, destiny arrived all the same: the New York Mets have finally begun their 2021 season and they did so in gloriously Mets-like fashion.

After having their season-opening series against the Washington Nationals cancelled due to COVID protocols, the Mets began their 2021 season on Monday night against the Philadelphia Phillies with Jacob deGrom, the sport’s best pitcher, on the mound.

deGrom was absolutely cruising, tossing six scoreless innings on just 77 pitches. Any manager would love to see their ace dominating like this right? Nope, wrong!

Mets manager Luis Rojas decided that taking deGrom out after 77 pitches and handing the game to the Mets’ perpetually shaky bullpen was the better idea. Guess what happened next? That’s right, the Mets’ bullpen utterly melted down, giving up five runs in the bottom of the eighth, leading to the Mets ultimately losing 5-3. Mets fans, and baseball fans in general, reacted exactly how you’d expect, therefore *truly* marking the beginning of the 2021 MLB season.

Luckily I bet the Mets First 5 Innings because I’ve been watching these losers pull this shit my whole life. pic.twitter.com/CGhqCCBWAg

Maybe next time Jacob deGrom is at 77 pitches through six innings, Luis Rojas will let him pitch the 7th inning. #Mets

Nice to see Luis Rojas making the exact wrong decision at every turn today. Promising for the season.

You motherfuckers really did Jacob deGrom dirty again? Shame on you #LGM pic.twitter.com/lMoSfc0Sbo

Jacob deGrom on the mound, the Mets can’t hit. Nature is, in fact, healing.

31st time in deGroms career that the bullpen blew a win for him. man.

The Mets at the end of games when DeGrom pitches
pic.twitter.com/0kYwlDfWFW

The Phillies were obviously thankful for the remarkably boneheaded decision, as franchise star Bryce Harper told reporters after the game that the Phillies were “happy” to get deGrom out of the game.

Now, as for why Rojas decided to pull the best pitcher on planet Earth after six scoreless innings?

“It came down to the six ups, going out for six innings, and he hasn’t thrown in 10 days,” Rojas said.

“The conversations with him between innings led us to pull him. I thought it was in agreement with everyone (to pull him) after 6.”

The New York Mets will get their chance at redemption — or another chance to further torture their fans — tonight when they take on the Philadelphia Phillies at 7:05 p.m. EST. They’ll have Marcus Stroman on the hill tonight, so if manager Luis Rojas decides to mismanage and blow the game, at least he’ll be doing so without the world’s best pitcher on the mound, saving the baseball world the pain of *yet another* blown Jacob deGrom win. That man deserves so, so much better.