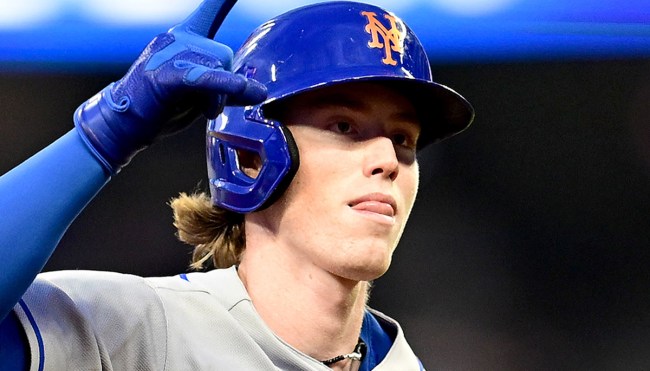 It’s been almost 150 years since the National League of Professional Base Ball Clubs (which is widely considered the first “major league”) kicked off its inaugural season in 1876, and since then, more than 20,000 people have earned the right to say they’ve played in at least one MLB game.

As of Wednesday morning, there were 130 members of a fairly exclusive club reserved for people who took full advantage of the chance to make their mark as soon as possible by hitting a home run in their first MLB at-bat. However, that number increased by the time the night came to an end courtesy of what unfolded when the Mets faced off against the Braves in Atlanta.

Mets prospect Brett Baty spent the past few months as a member of the Binghamton Rumble Ponies. However, the 12th-overall pick in the 2019 draft finally got an invite to The Show on Wednesday to fill a void at third base that formed after New York was forced to place both Luis Guillorme and backup Eduardo Escobar on the IL.

Baty got his first chance to step up to the plate in the top of the second inning. After letting the first pitch from Jake Odorizzi go by for a ball, he got an incredibly juicy 72 MPH curveball down the heart of the plate and took full advantage by ripping a home run to right field.

Baty was one pitch away from joining the even more exclusive club of the 31 MLB players who sent the first pitch they ever saw over the outfield wall, but despite baseball’s penchant for painstakingly chronicling incredibly specific achievements, I was unable to find a list of guys who homered on their first MLB swing.

That moment was cool enough on its own, but it was even better when you consider Baty’s parents and siblings were in the stands to watch him make his debut—and a camera captured the incredible reaction they had when they witnessed him go deep (the crowd that gathered for a viewing party at the high school he attended in Texas was also understandably amped).

Brett Baty hit a home run in his first MLB at-bat and his family's reaction was as priceless as it gets pic.twitter.com/X8Gcm0Wu8J

Baty made sure to give props to his mom on his way back to the dugout following his trip around the bases, and he got the chance to link up with the who clan on the field after his team walked away with a 9-7 victory.

Brett Baty celebrated his first homer with his mom before he got to the dugout 🥹 pic.twitter.com/lKmUBZAnWT

Brett Baty with hugs for his family after his major league debut! pic.twitter.com/EBm2Zb4FaI

After the game, Baty said a stadium employee took the time to track down his first home run ball after it landed in no man’s land in right field, so he’ll also have a nice souvenir to take home.