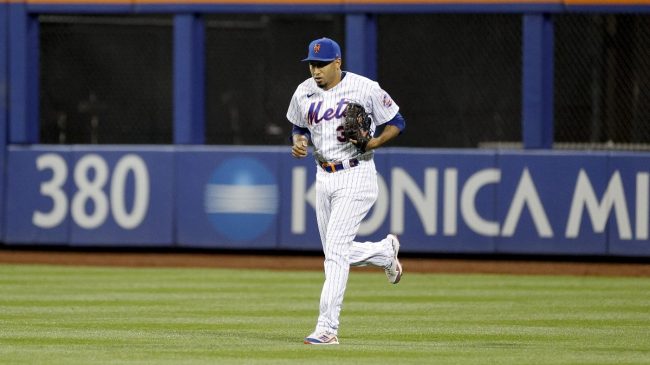 While Week 9 of NFL football was in full swing, the MLB dropped some big news. The New York Mets made its fanbase incredibly happy after finding a way to re-sign their closing pitcher. We’re going to be hearing the trumpets for quite some time after Edwin Diaz re-signs with the organization.

According to Ken Rosenthal, “Edwin Diaz and the Mets have agreed to a five-year, $102 million contract with a $12 million signing bonus.” That’s a solid deal to get done, as New York retains their star closer.

The trumpets will continue to sound in Queens.

Edwin Diaz and the Mets have agreed to a five-year, $102 million contract with a $12 million signing bonus, a source confirms to @Ken_Rosenthal. pic.twitter.com/WzXwrfKPKn

This is a smart move for the Mets, as keeping their star pitcher ensures their rotation for the long run. Edwin Diaz signed a massive contract and he should be ecstatic as well. Of course, the fanbase is losing its mind as they’re sounding the trumpets in November.

The Mets were not messing around.

HOLY SHIT THAT WAS QUICK

It’s safe to say Mets fans are ready for the next season.

We’ll see how it all plays out. Many were concerned New York would lose many of their stars through the offseason. Instead, the Mets are doing what they feel is necessary to maintain its current roster. Look for Edwin Diaz to continue playing at a high level in 2023 after signing this massive contract.