While You Were Watching Football, The Mets And Yankees Put On A SHOW, Lindor And Stanton Trade Chirps And Clutch Home Runs 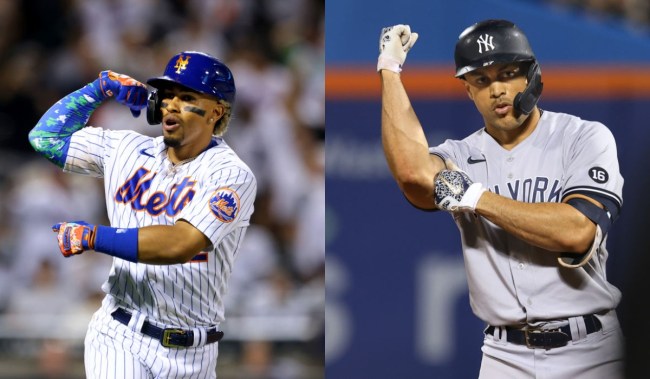 For a league that’s often criticized for its decisions when it comes to the growth of the game’s national profile, Major League Baseball scheduling a Subway Series on the 20th anniversary of 9/11 was as shrewd of a move as they’ve made in some time, as the atmosphere at Citi Field this weekend was, quite simply, electric. The fact that both teams are fighting for their playoff lives certainly helps.

Following a Friday night appetizer that saw the Mets cruise to a 10-3 win, the New York City rivals put on two highly contested one-run shows in the following pair of games, with both the Yankees and the Mets getting the best of one another.

On Saturday night, following a spine-tingling tribute to 9/11, the Bronx Bombers bested the Metropolitans 8-7 thanks to a game-tying home run from Aaron Judge in the top of the 8th.

The follow up on Sunday night, while everyone was probably busy watching the Los Angeles Rams whoop the Chicago Bears, was somehow even more box office with the Mets coming out on top 7-6 thanks to THREE home runs from Francisco Lindor, who finally seems to be making his mark in Queens after a rocky first season in New York. More so than the homers themselves, though, is what Lindor and Yankees outfield Giancarlo Stanton said to each other as they traded moon shots.

Following his second home run, Lindor made a whistling sign towards the Mets bench before chirping towards the outfield as he rounded the bases. Lindor did this, he says, because he believes he heard to Yankees whistling from their dugout to let batters know when the Mets pitchers were tipping their pitches:

Giancarlo Stanton hits a home run to tie the game and has some words for Francisco Lindor as he rounds the bases so benches clear pic.twitter.com/l4eAdOI3f8

Francisco Lindor discusses what went down between he and Giancarlo Stanton: pic.twitter.com/clzX7xWGP8

The fireworks were far from over, though, as Lindor responded to Stanton’s game-tying two-run homer with a game-winning solo shot in the bottom of the 8th, giving the Mets a much-needed series victory over their fellow New York City ball club.

Unfortunately for both of these teams and the city of New York, a postseason appearance from either is looking unlikely, which really is a shame, because no matter if you’re in the Bronx or Queens, playoff baseball in the Big Apple is one of the best spectacles in professional sports.