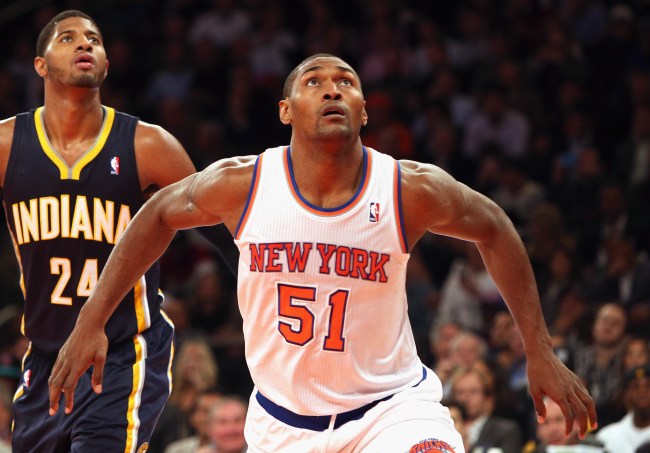 Metta World Peace was one of the wildest athletes ever. While the one-time All-Star and former first-round pick was dynamic on the court, he’s probably best remembered for starting the “Malice in the Palace” during a game in Detroit in 2004, where he famously charged into the stands and attacked a fan who threw a cup of water at him.

Although Metta World Peace did win an NBA title and a couple of individual awards during his NBA days, overall, he may not have fully reached his potential because of suspensions and other factors, which led him to recently open up about some of his regrets from his time in the league. And, revealing even more about himself, the former baller gave a little bit of detail about how bad things were even before he entered the NBA.

Following the release of a documentary from Bleacher Report about his life called Quiet Storm: The Ron Artest Story, Metta World Peace spoke with the New York Daily News‘ Stefan Bondy about his pre-draft workout that was supposed to be with the New York Knicks. Apparently, World Peace gave a bogus excuse as to why he couldn’t make the workout, but the real reason he skipped it was because he was up all night partying the day before. Here’s what Metta had to say to Bondy, reflecting on why the Knicks eventually passed on taking him in the 1999 NBA Draft.

“Honestly, I caused that,” World Peace said. “Because I was getting in trouble. I didn’t show up to my first Knick tryout. I was partying the night before in New York. I was f–ked up. I had my Knicks tryout the next day. I got drunk in Westchester, in the hotel, like, ‘Yo I can’t make it out the bed.’

World Peace told reporters in 2003 that he missed the initial work out because of an upset stomach, and then returned for a group session that included prospect Shawn Marion. Asked Thursday if the Knicks knew that drinking was at the root of his absence, World Peace said, “I didn’t show up. Either way, I didn’t show up.”

Man, what could have been for the Knicks, right? After all, Metta World Peace was a New York kid who played college ball at St. John’s, so he would’ve played in front of lots of friends and family — which may or may not have been a good thing for a young kid just breaking into the league.

“I wish I could’ve went to the Knicks,” World Peace said. “That’s where I wanted to go.”

“They would’ve traded me in two years,” World Peace said before reconsidering that stance. “But maybe I would’ve had more support. I mean, I’m from New York. Who knows? I was hoping I was going to New York. That would’ve been huge, man. It would’ve worked out good.”

With the Knicks upset with Metta World Peace ditching them in the pre-draft workout — regardless of the reason — they decided to select big man Frederic Weis from France with the 15th overall pick instead, which remains one of the most confusing decisions by the team. But now we have an idea why they did it after hearing the full story about World Peace’s partying ways.