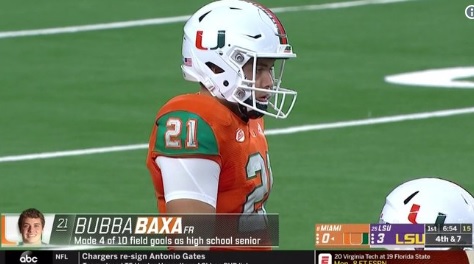 Before the start of the college football season, the University of Miami football team was pretty excited about their new kicke Bubba Baxa’s ability to kick a field goal for over 60 yards.

Baxa, the University of Miami’s new kicker, will turn 19 on the day of the Hurricanes’ home opener Sept. 8 against Savannah State.

But for now, the 6-0, 205-pound true freshman, rated the nation’s No. 2 kicker in the Class of 2018 by Kohl’s Kicking and No. 4 by ESPN, is focusing on nailing his field goals, extra points and kickoffs against LSU in Sunday’s season opener.

UM special teams coordinator Todd Hartley said coaches evaluated “about 15 to 18 kickers’’ around the country while recruiting and Baxa was “head and shoulders above the rest from a consistency and accuracy standpoint.’’

Baxa’s longest field goal in a game was 54 yards this past year against Dobie High. He said his longest during a practice was 70 yards before the start of his high school camp. He committed early to UM, choosing the Canes over Baylor and Army

During Sunday’s game between LSU, ESPN showed a graphic that revealed Baxa went 3-10 as a kicker in high school which left everyone completely baffled as to how he was ranked so highly despite his abysmal stats.

Bubba Baxa went 4/10 as a High School Senior and still went to a D1 football program.

NEVER GIVE UP ON YOUR DREAMS, KIDS! 🏈🙌 pic.twitter.com/XCNMTA3EFE

Bubba Baxa went 4-10 on FG his senior year of high school and is now the starting kicker for the U. I played the wrong position smh 🤦🏻‍♂️

How does Bubba Baxa get a major offer going 4/10 as a high school senior? They all 55+ yard attempts? pic.twitter.com/iSNJsByWVs

Bubba Baxa is the greatest name in place kicker history

Miami has a kicker named Bubba Baxa and he was 4/10 his senior year of high school…. how did Saban whiff on this guy

Bubba Baxa went 4 for 10 in high school? WTF sort of stat is that. Lol ridiculous

Bubba Baxa was 4/10 his senior year kicking FG’s, but somehow he’s the kicker at Miami? Politics is a huge in college ball.

Not hating but I am… Bubba Baxa (awesome name) but how are you ranked as a top 5 Kicker but went 4/10 your senior year. Scouts bumped him up because of his awesome name?? #Miami #NCAAF