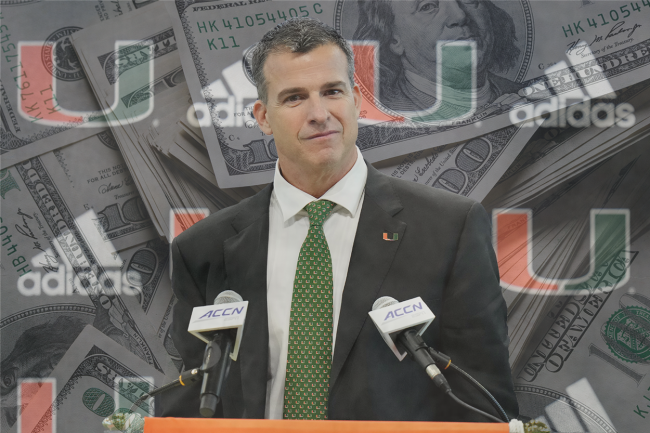 The University of Miami officially introduced Mario Cristobal as its new head football coach earlier this week and the much school’s faculty is reportedly not happy. Facing pay cuts, teachers and staff are fuming over the large coaching contract.

To hire Cristobal, the school is paying a small fortune.

When it’s all said and done, the total likely comes out to more than $100 million to lock down Cristobal for the next 10 years. To pay that lump sum, Miami is reportedly using the money it made off of treating sick people.

Meanwhile, according to the Miami Herald, the university slashed more than $100 in its matching contributions to the retirement plans of faculty members as part of deep pandemic cutbacks. That is a literal 1-to-1 comparison.

Now, the athletic budget and the university budget are two very separate things and the football team makes more money than most other university entities combined. That is just a nature of the business.

However, that doesn’t take away from the fact that $100 million was cut from faculty retirement plans while the athletic department hired a new football coach for about the same number.

Not a great look. Shady U is so back.

“It’s hard to imagine how the school really expects to compete for high quality academic talent when it is choosing to spend money in places that it seems to value more highly,” said one faculty member who did not want to be identified to the Miami Herald.

The Faculty Senate is raising similar concerns. It is wondering why there is enough money for major capital projects and a new football coach, but not enough money to reimburse the faculty retirement funds for eight to nine months of losses.

Again, it comes down to the business of football and athletics. It’s a completely different entity.