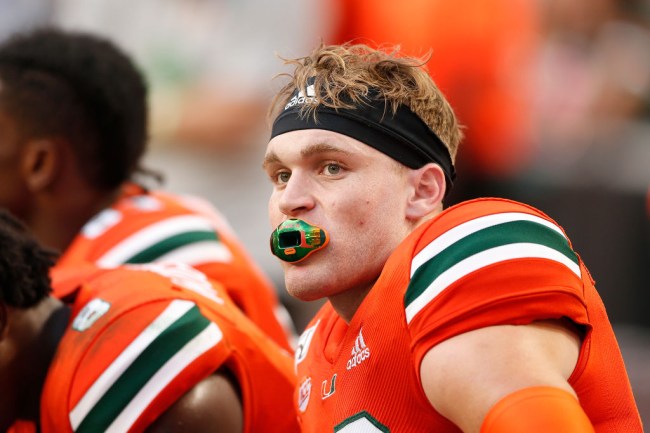 Miami’s performance in the Independence Bowl was so Miami-esque it’s hard to believe it actually happened, but trust us, it did. The Hurricanes were blanked 14-0 by the powerhouse that is Louisiana Tech on Thursday night.

This is no shot at the Bulldogs of Louisiana Tech, but Miami isn’t supposed to be playing in bowl games against non-power five programs unless said program is at worst a one-loss team and it’s a New Years Day game. Then again, the fact the Hurricanes found themselves in the Independence Bowl against Louisiana Tech is a spot-on representation of the football program.

The fact they were shut out 14-0, though, that’s just a blessing from the football gods on those that aren’t fans of Miami. Let’s not kid ourselves here, Miami is one of the most disliked football programs in all of college football by those that didn’t go to school there or live in Miami and the utterly atrocious loss on Thursday made plenty of folks happy.

You can just head over to Twitter and see for yourself how people are feeling following the loss.

While Hurricane fans can lean on the excuse of this season being Manny Diaz’s first in charge, it still doesn’t take away from the fact that the storied program got blanked by Louisiana Tech. It also doesn’t discount the fact the team went 6-7 this season, nor how the Canes have one 10-win season since 2004 nor does it explain how they’ve won one bowl game in 12 seasons.

The program is always going to be well-known for the next class of kids being recruited thanks to its rich history, the U logo, and location but this program hasn’t been relevant in quite some time and the Independence Bowl debacle was the perfect representation of just that.

You know things are bad when the school’s athletic director has to jump on Twitter to address a performance in a bowl game.

Miami has been successful enough to make it to consecutive bowl games over the last two seasons only to score a combined three points thanks to a 35-3 loss to Wisconsin in last year’s Pinstripe Bowl. The one positive Miami fans can take away from the loss is that their team’s defense played better in this year’s bowl game than last year’s holding Louisiana Tech to only 14 points.

Things are not good in Miami. The Hurricanes have been a punching bag in the college football world for quite some time and the loss in the Independence Bowl solidified their status among just the above-average football programs around the country.

We can’t get out of here without talking about that play from Tate Martell during the loss to the Bulldogs. If the scoreline wasn’t a great representation where this team is, let Martell pulling out juke moves eight yards away from players and running around 40 total yards to lose a half-yard serve as a visual representation.