Miami Missed A Chance To Improve The Draft Pick They Got From Pittsburgh With A Win, And Dolphins Fans Don’t Know How To React 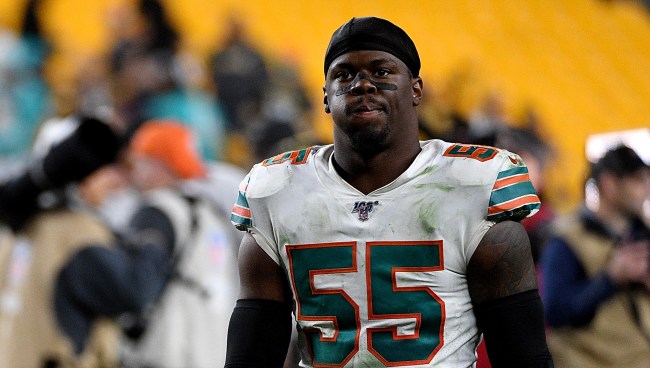 The Miami Dolphins coaching staff and front office appeared to prove once again Monday night that reports of the team tanking to get the number one overall draft pick in 2020 are true.

Following the team’s trade of star running back Kenyan Drake to the Arizona Cardinals on Monday, the Dolphins shot out to a quick 14-0 lead only to snatch defeat from the jaws of victory and come from ahead to lose 27-14, dropping them to a robust 0-7 on the season.

Now all the Dolphins basically have to do to secure the top pick in the next NFL draft is lose to the 0-8 Bengals on December 22nd, cementing their status as the worst team in the league, “ahead” of the 1-7 Redskins, 1-7 Falcons, and 1-6 Jets.

Fitzpatrick, who had two interceptions during the game, certainly didn’t help matters.

When the Dolphins traded Minkah Fitzpatrick to the Steelers for multiple picks, I don't think this is what they meant.pic.twitter.com/6n9lNHyY0v

So one can understand the conundrum Dolphins fans faced on Monday. Win and their first round draft pick from Pittsburgh gets better, plus, yo, it’s finally a win. Or, lose and strengthen the team’s chances of being able to pick number one overall.

Do the dolphins really want to win and lose out on the first pick? But if steelers win, the pick they gave to the dolphins will be higher? Would a tie be best?

*pushes glasses up* well actually ☝️the Dolphins own the Steelers first round pick and would still be tied for last with the Falcons and Washington if they won so this is the one game all year they do actually want to win. https://t.co/bbl4IOvPc6

The Dolphins trying to figure out a way for both teams to lose tonight because they have the Steelers draft pick #FinsUp pic.twitter.com/RRNYoelYKE

Dolphins wanting to tank but remembering they have the Steelers 1st round pick. pic.twitter.com/VzbCgYuNFN

Supposedly the Dolphins were out of Tank mode for this one game because they own the Steelers 1st round draft pick and they still almost blew the cover.

Yeah but if the Dolphins won today to get a better pick from the Steelers, then lose to the Bengals they would still have the first pick in the draft.

So… if the #Dolphins win tonight:

– They would get their first win of the season.

– Improve the #Steelers first-round pick which THEY own (via Minkah trade). pic.twitter.com/sTcNG2i12g

If the Dolphins win a game, it might as well be the one that makes the Steelers’ draft pick worse

Dolphins fans watching their team trying to mess up the first overall pick, but then they realize they got the Steelers 1st pic.twitter.com/KoEe5r4SXR

Dolphins playing 4D Chess out here. Beat the steelers so the 1st rounder they got from them is better, then go winless the rest of the season so you get the tie breaker over the bungles for the 1st overall pick #MIAvsPIT

The #Dolphins, masters of the tank, realize that even with a win tonight, they can still go 1-15 and guarantee the number 1 pick (via tiebreakers)

They also realize that they own the #Steelers pick, and beating them would make that pick better, so... pic.twitter.com/Tz9nIuoKBp

When a Dolphins win might cost them a No. 1 pick but also get them a second top five pick. pic.twitter.com/ohYkOvKzp9

It certainly is a confusing time to be a Miami Dolphins fan (what few that are left.)